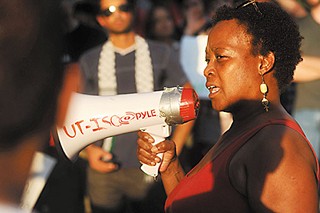 After unarmed black teenager Michael Brown was shot and killed by a police officer in Ferguson, Missouri, earlier this summer, the issues of police use of force and accountability were suddenly a nationwide topic. In Austin, renewed attention turned to the case of Larry Jackson Jr., who was shot and killed last year by a police detective who claimed Jackson was fleeing. (The Travis County D.A. has indicted the detective, Charles Kleinert, for manslaughter.) Moreover, at police accountability forums, protests, and conversations across the city, a more common concern about APD has emerged: Some Austinites don't believe the police are treating them fairly, nor do they trust the system in place for holding police accountable.

For some, the problem is a consequence of racism. Kathy Urdy-Rhambo grew up in the West Austin neighborhood of Clarks­ville. She says that before the area – historically a freedmen's town – was gentrified, it was the most diverse neighborhood in Austin. She doesn't recall having a problem with the cops – until she moved to East Austin. Now, she feels like she's viewed with suspicion, and says that when she visits West Austin, the cops will question her reason for being there. A white person in East Austin, she points out, isn't likely to be singled out for similar questioning. She finds it very frustrating that the cops "protect a select class of people," when everyone who lives in Austin must pay taxes, in one form or another.

Patricia Wheeler also feels that she, along with her family, has been mistreated by APD. Patricia lives in the Santa Rita Courts in East Austin. On the afternoon of July 20, her adult nephew and her cousin David were outside, "being loud," according to her. However, her neighbor thought they were fighting and called the police. Patricia says it took the police three hours to respond to the call, and her nephew had left the area. David had returned in his car and pulled in a parking spot close to the door of Patricia's apartment in order to pick up his young daughter, when Officer Alfred Paige approached him, apparently suspicious that he was one of "two black males" who'd been reported fighting.

In the police report, David is described as playing music loudly, making "furtive movements" toward his glove box, and then getting out of the car and walking quickly toward Patricia's apartment, when Paige called after him to stop, repeatedly. Patricia and her 18-year-old daughter, Che­nell, both argue that it wasn't reasonable for the officer to expect David to realize the officer was addressing him, because there were around eight or nine people in the same area, and he didn't try to single David out, but instead called out, "Hey you, stop!"

Paige decided to keep David from entering Patricia's apartment by Tasering him. Paige's report reads, "the subject opened the screen door and I utilized my Taser to stop the subject from entering the house, while the subject was still outside." According to the family, a prong of the Taser hit the ankle of then-6-year-old Janiyah, Patricia's granddaughter, who was playing with David's daughter and two other children inside the house, and had come to the door to see what was going on. They say the officer denied hitting Jan­iyah and claimed that she had imagined it after feeling electricity coming off of David, who was ultimately arrested for evading on foot. They also say that Paige refused to call an ambulance for Janiyah, who was visibly upset, but did offer to call an ambulance for Patricia, who felt like she might be having an anxiety attack.

The Wheelers are angriest about the fact that no one seemed to be willing to take Janiyah's claims seriously. If the officer believed he had to use his Taser, Patricia says, he should have used it before David got to the door, so that it wouldn't have been anywhere near the children. In general, the Wheelers believe that the police who patrol Santa Rita Courts routinely treat residents with suspicion; Patricia says they "look for stuff to happen." APD has a predetermined idea of "what these boys are like," she says, and that turns minor offenses many Austinites may casually commit – such as smoking marijuana or disturbing the peace – into arrests, which turn into jail and prison time, making it all the more difficult for those convicted to find employment.

Patricia has tried to draw attention to Janiyah's case by working with a local activist group, the People's Task Force. She would like to see Officer Paige fired, and an apology offered to Janiyah. She says that no one from APD contacted her to follow up on the incident, although APD Chief Art Acevedo has said there's an investigation underway, because it's APD's policy to investigate every time an officer fires a Taser. (It's also APD policy to use Tasers to prevent an unarmed suspect from fleeing, as a nonlethal alternative.) Patricia said this week that she has filed a complaint with the Office of the Police Monitor.