City Council: All This, and Bull Creek Too 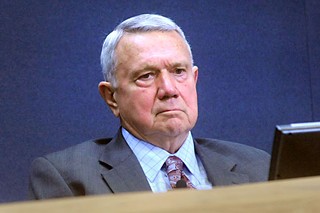 Last week ("Council: Here Comes the Sun"), following months of budget prep and numerous work sessions, we anticipated (as sometimes happens) a fairly ceremonial City Council adoption of the final FY2015 city budget. How wrong we were. After two grinding days of debate over found money – property tax appraisals and collections having come in higher than original projections – Council finally adopted the budget Tuesday afternoon, after adding a few lagniappes for particular needs; decided to move forward on the Onion Creek floodplain buyout; and determined to "explore" the purchase of a large tract of state land along Bull Creek, at 45th and Bull Creek Road.

The deliberations over the additional funds had a somewhat melodramatic rhythm, as Mayor Lee Leffingwell said at the outset he would strongly prefer any excess funds be used to draw down the property tax rate – proposed at 48.09 cents per $100 assessed value. (That's lower than last year's 50.27 rate, but – because of rising property values – will result in a $3.49 per month increase on a median-priced home, newly certified by the Travis County Appraisal District at $202,254.) Leffingwell moved to lower the rate to 47.73 – and lost, 6-1, a vote that would recur again and again over the two days of budget work. The mayor would object to one budget spending amendment after another, acknowledging these were undoubtedly "worthy causes" but would result in a higher tax rate – and then call the vote, invariably 6-1.

When the dust settled, the city announced a $3.5 billion (All Funds) budget ($854 million General Fund), including 59 more police officers (not without a final quixotic objection from Council Member Bill Spel­man, supported only by CM Laura Morri­son) plus 38 civilian staff; 17 new positions at ABIA; a 3.5% pay increase for civilian city employees (1% for public safety, pending a firefighters' contract); that new EMS unit; and additional library hours, as well as winter hours for Bartholomew Pool. (Including various fee increases, the combined bump on that median homeowner is estimated at $191/year.)

Leffingwell issued a statement declaring his disappointment in the outcome: "Afford­ability represents a key issue in Austin, and today's votes undermine efforts to preserve it. ... We missed a perfect opportunity to preserve affordability."

Leffingwell's stern austerity posture would make a good deal more sense if the mayor weren't also the presumed standard bearer for local Proposition 1, November's $1 billion transportation bond proposal, currently suffering strenuous political backlash because of its cost. Even while Council was wrestling over the budget, anti-taxers calling themselves "nonpartisan" Citizens for Tax Relief Now – but featuring mostly right-wing City Council candidates or Americans for Prosperity shills – were rallying on the plaza outside to demand more tax cuts. Oddly enough, the mayor's press release lamenting his colleagues' budget adjustments would have been cheerfully welcomed by the same crowd.

If the mayor truly believes Austinites, in one of the much-trumpeted, best economies in the country, can't afford to keep our libraries open, his "Rail or Fail" campaign is gonna be a really tough sell.