Our Chronicle News staff is losing the second member of Our Smith Team: Managing Editor for News, Amy Smith. (We lost Jordan Smith to The Intercept in February.) As she wrote in her final "Then There's This" column last week, Amy officially leaves the staff box at the Chronicle with this issue, although her leave-taking is not entirely final – she has a feature scheduled for the next issue, and plans to continue to write for us as a freelancer. We'll be glad to have her.

Amy's been a Chronicle trouper for – gasp! – 18 years, and she's been a tireless reporter, a devoted editor, and Jill-of-All-Trades manager for all that time. She's covered beats from city to county, electoral politics to environment, inside government and outside business – all with a clear, calm perspective and an individual voice. We'll miss her daily, deskside presence at the Newsdesk and in the weekly meetings – but she's promised not to be a stranger, either on-site or in print. We intend to hold her to that promise, and expect her byline to be a reassuring and continued presence for Chronicle readers, for years to come.

We wish her farewell on her new adventures, and we welcome her back on the next Chronicle story, down the line. 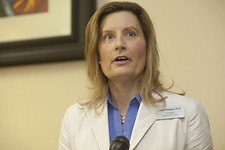 10-1 Ticker... Council Settles In
The election's over, but the Ticker's not