'Unconstitutional on its face' 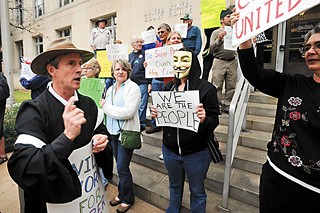 Move to Amend organizer, Michael Ryan (l), leads an Occupy the Courts rally on the steps of the U.S. District Court House on Jan. 20, 2012. (Photo by John Anderson)

"I will send this over to Sgt. James Boujemaa from our Fusion Center ... they are up to speed on groups like this/or they get up to speed very quick," wrote Austin Police Department Intelligence Unit Super­visor David Jarrell (since retired), in an email dated Jan. 4, 2012. Although the reference to "groups like this" and the "Intel­li­gence Unit" might conjure up images of homegrown terrorists organizing an attack, Jarrell's email instead referred to a rally organized by the political organization, "Move to Amend." According to its website, Move to Amend's mission is an amendment to the U.S. Constitution that states "money is not a form of protected free speech under the First Amendment and can be regulated in political campaigns."

That's not a sentiment normally associated with bomb-making radicals; and police monitoring of such groups, without probable cause to suspect actual criminal activity, raises serious constitutional questions.

The email was released in response to a Chronicle Open Records Request to APD, which operates Austin's Fusion Center (i.e., the "Austin Regional Intelligence Center," or "ARIC"). Responsive documents have revealed intelligence-gathering practices used by ARIC that appear to run counter to the Center's own policies. This has included constant monitoring of social media used by activists, and lists of individuals associated with Occupy Austin, the local offshoot of the Occupy Wall Street movement.

Developed by the Department of Home­land Security after 9/11, Fusion Centers facilitate information-sharing between federal and local law enforcement agencies. Though they were originally designed as a counterterrorism initiative, by the time ARIC was established in December 2010, many cen­ters, including ARIC, were instead designated as taking an "all-crimes" approach.

On its website, ARIC describes its mission: "to maximize the ability to detect, prevent, apprehend, and respond to criminal and terrorist activity." Other governing policies state that "ARIC shall collect and retain information only where there is reasonable suspicion that a specific individual or organization has committed a criminal offense or is involved in or is planning criminal (including terrorism) conduct or activity."

Activist groups have criticized the "mission creep" of Fusion Centers for perceived violations of civil liberties; locally, the ARIC email reference to Move to Amend is a good example of those concerns. Moreover, the ARIC monitoring apparently extended to the group's individual members.

In December 2011, Move to Amend organizer Michael Ryan contacted the U.S. Mar­shal Service to obtain a permit for a rally outside Austin's federal courthouse. The permit was granted, and the rally took place without incident. However, during the permitting process, an email reflects USMS Deputy Marshal Darren Sartin stating he is "trying to get more information on Michael Ryan." Addressing a fellow USMS deputy, he continued "you might have better luck with your APD contact though [apparently referring to Jarrell]. If I learn anything else I will let you know." Included was the group's website (misspelled). The email was forwarded to and received by ARIC. Asked if he was aware of or had any reaction to ARIC's investigation, Ryan responded that he didn't even know ARIC existed and "it felt strange to be referred to in that manner."

One of ARIC's functions is to produce "Situational Awareness bulletins," compiled through various sources and analyzed. The day after Sartin wrote the email about the rally, ARIC issued a bulletin, mostly about Occupy Austin's activities – but included was a description of Move to Amend's rally, which the group was calling "Occupy the Courts." The report listed the group's website address, still misspelled as "movetoammend.org." There's no indication, however, of how this might connect to any criminal activity.

"We Don't keep lists of people"

Although there were numerous incidents requiring police intervention that involved transients during the encampment at City Hall, the "criminal activity" most commonly associated with Occupy Austin activists involved refusing to obey Criminal Tres­pass Notices. The notices banned those "noticed" from being on City Hall property for a day, or up to a year, depending on the offense. Many offenses involved, as a form of civil disobedience, refusing to move for plaza cleanings. ARIC facilitated the banning process by keeping lists with names, dates of birth, offenses, and mugshots of arrestees (and even a few people who had only received CTNs). Officers at City Hall would use the lists to identify protesters who had violated a CTN. By the time the group was evicted, ARIC had created at least seven different spreadsheets, modified over time, documenting each CTN change; the longest list cites 99 people.

As a result of a lawsuit brought by two Occupy Austin participants, the banning process was ruled "unconstitutional on its face" by federal District Judge Lee Yeakel. The ruling confirms that the city of Austin and APD had essentially used ARIC as a tool to violate the Constitution.

Described in the two documents that outline the governance of ARIC, the role of the Privacy Policy Advisory Committee is to review ARIC's privacy policy annually "to ensure safeguards, and sanctions are in place to protect personal information" and provide "a report to the Partner Agencies no less than once each calendar year that details all proposed or executed changes to the Privacy Policy."

Fusion Center privacy policies vary widely across the country; according to members of the PPAC, ARIC's privacy policy is considered a "model" policy for other centers. One area in which ARIC's policy excels is the inclusion of a "community advocate" position on the committee. Of 70 different Fusion Center Privacy Policies reviewed by the Chronicle, ARIC's is the only policy that includes a community advocate.