So many candidates, so little time

Ballot applications closed Monday at 5pm at the City Clerk's office, and by later that evening, the staff had posted all the qualified candidates. We didn't break 80, but got close, with the fewest filers in District 9 (three candidates), and the largest field in District 3 (an even dozen – a couple more had filed campaign treasurer designations, but didn't make the final ballot). A few notes follow (especially on late filers), now that the campaigns officially begin, after months of campaigning by some of the early birds. We'll keep updating our candidate profiles on the Election page (a few of the late filers appeared only in the last two days), and covering the individual races as the weeks proceed.

Mayor Pro Tem Cole filed for the ballot Monday afternoon, as did Krenek. The big three remain Adler, Cole, and Martinez – but eight names on the ballot could mean a December run-off. Krenek lists her occupation as "investor & activist-speech zone"; Orshalick is a retired tech writer.

Late filers were "small business owner" (gun dealer and trainer) Cargill and engineer Hindman, both of whom have campaigned in the past – Cargill for County Constable and Hindman for Congress.

Owen, Reyes, and Sheppard all filed on the final day, although Reyes has been campaigning for some time. Owen lists his occupation as "Coca-Cola technician" and Sheppard is a Realtor.

This is the most crowded race, with several late filers (Hoerster, Phillips, Valera) adding to the range of choices. Charges and counter-charges are already flying here; campaign forums should at least be entertaining, if not enlightening.

This race has been set for some time, with all eight candidates campaigning throughout the district for the last two months. There was initially some furor over who might be a "newcomer" to District 4, but that seems to have subsided of late.

Default favorite would be former state rep Kitchen, but Buda also has Lege experience (former chief of staff for Wendy Davis). Late filer Kennedy is best known for her appearances at Citizens Communication, occasionally serenading Council with seasonal or self-composed tunes; she lists her occupation as "writer." Attorney Floyd also got in under the wire on Monday.

District 6 is the most politically polarized in an officially nonpartisan campaign: Kelly, Phillips, Wiley, Zimmerman are all Republicans of varying stripes, Flannigan and former state rep candidate Stillwell are Democrats. We could pretend otherwise, but that is likely to have a decisive effect on the votes.

The race for this Southwest district has been set for a while; Both May* and Pierce have run before (2006); Scruggs filed late but has been campaigning for some time. As in District 6, party affiliations are likely to play a role in the vote.

Riley and Tovo are the only Council incumbents running for re-election, but were drawn into the same district. Their name recognition likely discouraged potential challengers. 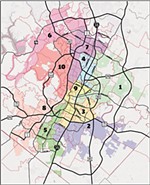 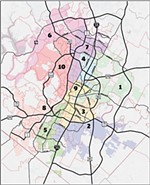 The Road to 10-1: Now We Begin
How to fit six dozen candidates into a one-pound newspaper