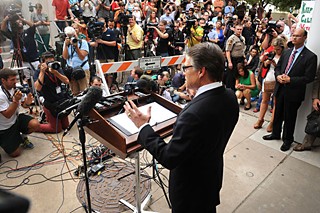 • Gov. Rick Perry faces two grand jury felony indictments for abuse of power and coercion of a public official for his actions related to threatening to veto funding for the Travis County-based Public Integrity Unit. Perry, who has called the indictment a "farce," was booked, finger­printed, and had his mugshot taken earlier this week. His lawyer filed a waiver of arraignment and a plea of "not guilty" to both counts during their visit to the courthouse. See "Perry's Aggressive Defense" for more.

› What rhymes with 78? That's how many candidates qualified for the City Council ballot by Monday's deadline: There will be eight mayoral candidates and a race in every district, from three opponents in District 9 to a dozen in District 3. See "The Road to 10-1."

› No formal Council meeting until Aug. 28, but last week they held a couple of Special Called meetings (tweaking the transportation bond language, and addressing the Onion Creek ­buyouts), and this week are knee-deep in ­budget deliberations.

› A couple of long-awaited openings: The ACC Highland campus opened this week, with classes starting Monday, Aug. 25, and Capital Metro's MetroRapid 803 line begins service Sunday, Aug. 24, running from Parmer in the north, down Burnet and Lamar, to Ben White in the south.

› The Livestrong Foundation has donated $50 million to the new UT-Austin Dell Medical School to create the Livestrong Cancer Insti­tutes. The contribution, to be doled out over 10 years, puts the med school ahead of its $3 billion, eight-year capital campaign goal.

› A Travis County judge denied Michael Quinn Sullivan's request for a temporary injunction against the Texas Ethics Commission, which recently slapped Sullivan with a $10,000 fine for failing to register as a lobbyist. Sullivan is president of right-wing lobby group Empower Texans.

› In more Perry news: Members of the grand jury that indicted Perry are offended by the guv, who called the decision politically motivated. Jurors described Perry's criticisms as "disrespectful" and "unfair" – one juror said that when all the facts in the case become public, perception of his actions will change, reported the Houston Chronicle.

› Protests and unrest following the police shooting of Michael Brown in Ferguson, Mo., continued this week, as Missouri Gov. Jay Nixon called out the National Guard and U.S. Attorney General Eric Holder traveled to Ferguson to intervene in the crisis. Holder wrote, "Our investigation into this matter will be full, it will be fair, and it will be independent."