A controversial policy decision is forcing Justin Wallace to leave the place he has called home for the past 12 years, but he doesn't know it – a cognitive disability prevents Justin from being fully aware.

Wallace, 33, suffers from severe autism, and receives specialized care at the Austin State Supported Living Center (formerly the Austin State School) at West 35th and MoPac. While he may not fully comprehend the impending life transition, his family certainly does. In June, the Wallaces were "blindsided" when they received a letter from the Austin center notifying them that Justin, and roughly 70 other people with intellectual and developmental disabilities, would be forced out by as early as September. Within the next three months, Justin will need to relocate to an SSLC in another city – and away from his family support network – or rely on community services alone. For his mother, Debra, both options will place her son in greater danger.

"We are devastated – what is going to happen to Justin?" asks Debra Wallace. "And unfortunately, it's not just us – other families are panicking, too."

The decision to downsize the Austin SSLC (initiated in 2012) comes after the Sunset Advisory Commission, a state agency tasked with identifying governmental inefficiencies, issued a report that recommended closing the Austin SSLC (by 2017) and five other state-supported living centers to be determined at a later date by an advisory committee – largely for cost-saving reasons. The argument largely hinged on dollars and cents: In 2013, Texas spent $661.9 million on SSLCs that serve about 3,650 people. "Delivering services to a person for a year in an SSLC costs about $113,000 more than serving that person in an equivalent program in the community. ... The State can no longer afford to support all 13 centers," the report reads.

The report also points to lack of compliance with requirements imposed on the Department of Aging and Disability Ser­vices by the Department of Justice in 2009, following reports of abuse and neglect at all 13 centers. (Families the Chronicle contacted are cognizant of the troubled record, but say they have had nothing but positive experiences with the center, and some suggest that DADS has grown lax in regulating and managing the centers. Indeed, the Sunset report even notes, "DADS needs to step up to the plate and more aggressively take on its role as a regulator.")

A month after the Sunset recommendation, DADS recommended accelerating the shrinkage of the Austin center, citing high overtime expenditures amid struggling employee recruitment and retainment, especially in light of the Sunset proposal. DADS called for the permanent closures of seven of the SSLC homes on the expansive state campus – or as they put it, "developing a more intensive, census management plan."

"We don't make this decision lightly, but we strongly believe that getting the facility to a more manageable size is in the long-term best interest of our staff and more importantly, the individuals we serve," DADS Assistant Commissioner Scott Schal­chlin wrote to families in May.

On Wednesday, Aug. 13, the Sunset Commission voted to close the Austin SSLC and task a committee with determining how many and which other state centers to close. The closures would mark the first since 1995. They would affect 300 intellectually and developmentally challenged Austin residents, and could impact up to 1,000 residents statewide. But while the Sunset recommendation of actual closure will require a legislative nod in the 2015 session, nothing stops DADS from "downsizing" the center in the meantime – and that's just what they've begun to do.

The closures will come in waves – three "cottages" will be closed by Sept. 15; two more by Oct. 1, and another two by Nov. 1, according to a June letter addressed to families.

While families of those to be displaced have voiced strong opposition to the move, some community-support advocates say it's long overdue. "People with disabilities should be integrated with communities, not segregated," Dennis Borel, executive director of the Coalition of Texans With Disabilities, said. "It's time to make a smart decision by providing services that are in high demand and are far more cost effective than institutional care."

Families like the Wallaces aren't opposed to community-based care; many wholeheartedly support those services. However, they say that living outside an SSLC, their loved ones will not receive an equivalent degree of individual attention. Unlike a "group home" setting, SSLCs house an infirmary staffed 24 hours a day, and employ physicians, therapists, nurses, and a dentist, all of whom are specialized in treating medically fragile and behaviorally challenged patients who may suffer from autism, blindness, deafness, and seizure disorders.

Like many residents, Justin, prone to self-injury (sometimes smashing his head through windows and walls), requires constant supervision and immediate access to hospital-level services. "Our son could never survive in the community – if he were to be transferred to a group home, he would be dead in a day or two," said Debra Wallace bluntly.

Forrest Novy agrees. His brother, Wayne, has serious behavioral problems and would not be safe outside an SSLC setting. With a professional background in special education and learning disabilities, Novy asserts not all cognitively disabled people thrive under the "least restricted" environment. The other choice – sending loved ones to SSLCs in Brenham or San Antonio – pushes the disabled further from guardian oversight. "It shouldn't be an either/or situation," said Novy.

To alleviate the worry, DADS is telling families that "transition teams" will closely monitor the moves and ensure that residents are safely placed within the community or at an alternate SSLC. "We understand their concerns and are committed to making sure services are available in the community before they move out," DADS spokeswoman Melissa Gale told the Chronicle.

Justin Wallace's mother wishes they didn't have to make the forced transition in the first place. "Basically, they have made the most vulnerable in our society beggars at their own tables," Debra Wallace said.

Families stand confused about the swift and unexpected nature of the relocation, and many have asked for extensions to figure out safe alternatives or an appeal process. 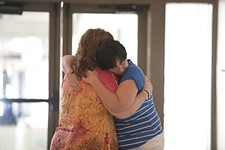