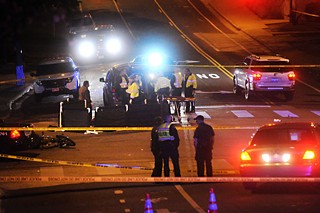 The South by Southwest Conference & Festival announced itself officially "open for business" Aug. 4, unveiling new messaging promoting the 2015 event throughout its website. The 10-day conference runs March 13-22, with planning across all conferences already underway – even as Austin continues to deal with the events of last year's Red River tragedy.

Little progress has been made in the case of Rashad Owens, the person accused of drunk-driving through a barricade on Red River Street, killing four people and injuring 20 more. The 21-year-old was due in court for a pretrial appearance April 9 that was reset to April 30. Another no-show on that date reset Owens' first appearance to June 3, when Judge Cliff Brown reset the hearing again to July 8 – when it was pushed back once more, this time on request from Owens' lawyer, Dallas-based defense attorney Rickey Jones. Owens is next due in court on Sept. 2, though it'll be no surprise if that's once again reset. "He does have quite a few cases," said Travis County Court Clerk Janice Porter, speaking of Owens' counts of capital murder, four counts of felony murder, and 24 counts of aggravated assault. "It will probably be a while before they actually get everything together." Porter believes it could be another year before Owens goes to trial.

The courtroom delays coincide with the continuous pushback of City Manager Marc Ott's "full post-event evaluation of all events taking place during SXSW," a report originally due June 30 that was extended 30 more days, until the end of July. Ott's office hasn't passed the review to City Council, however, and we're now inching toward mid-August. A city spokesman told the Chronicle Aug. 1 that the report's completion is still likely "several more weeks away." Former APD Commander Bill Manno, the city's corporate special events program manager, said that no public meeting regarding the review is scheduled.

This all comes as the Texas Alcoholic Beverage Commission is also investigating the whereabouts of Owens in the period immediately preceding his flight from police and the subsequent crash. Media reports in the aftermath linked Owens with Club 1808, where he was reportedly scheduled to perform an unofficial showcase at 1am. Club staff there that night maintain Owens never showed.

In the meantime, the 12th and Chicon space that houses Club 1808 remains in a state of flux. Club owner Gene Mays submitted an affidavit to TABC to remove his bar's liquor license from the address, thereby allowing Philadelphia import Maydee Distefano to open her new club, Dozen Street (see "Playback," June 13), before next year's SXSW. TABC didn't process the paperwork in time, however, and now won't do so until the investigation is complete. A representative for TABC said Friday that no other permits could move into the address until its source investigation is complete, meaning Distefano must operate Dozen Street under a management agreement with Mays – one in which he's still technically the owner – and can't advertise the venue. TABC has said its investigation won't be complete until APD closes its own.

How the APD investigation concludes will also likely determine the course of action four Texas lawyers take in their representation of seven different crash victims: Curtisha Davis, Luis Suarez, Jacqueline Longhurst, Evan West, and Ryan Freeman, as well as the estates of Jamie West and DeAndre Tatum, both of whom died as a result of the crash. Attorneys Keith Herbert, Sarah Swift, Jeff Edwards, and Oscar Mendez Jr. have been in correspondence with one another, report Herbert and Mendez Jr., and are considering taking legal action against both the city and SXSW for failing to provide proper safety precautions – Herbert, representing Tatum's estate and Davis, cited the use of a series of "plastic fences" to serve as street barricades. In an 11-page legal memo issued July 28, SXSW attorney Pete Kennedy (who also represents the Chronicle), wrote to Herbert that he did not believe the company was liable for any injuries sustained as a result of the crash.

Herbert told the Chronicle that in the case of both potential defendants he'd prefer to "find an amicable resolution" rather than file suit and go to trial, and that he's been in touch with city attorney Gray Laird to arrange a meeting. "However," he wrote in a letter issued Monday, "five months after the tragedy said [police] report has not been forthcoming and this attorney has been unable to find anyone in the city who can say when or even approximately when said report might be forthcoming."

Mendez Jr., who lives in El Paso and represents Suarez and Longhurst, equates any potential litigation against the city to "mental gymnastics." "Any time you're trying to sue a political government or form of the government, there's an immunity from suit and different courses of action," he said, referencing the Texas Tort Claims Act, a set of statutes that says a governmental unit is only liable in very specific instances. "It's not something that you just dive into." He says he's waiting on a full police report of the incident, one that goes beyond the affidavit issued one day after Owens' arrest, and recounts every detail surrounding the incident. Problem is, that report won't be made public – as is standard in "open investigations" – until Owens' case goes to trial. When that will happen is anybody's guess. 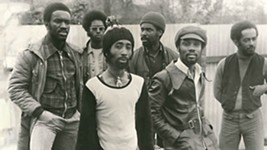 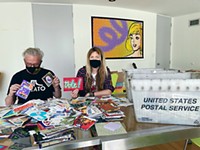 With Postcards for Democracy, Mark Mothersbaugh and Beatie Wolfe Deliver Priority Mail Art
If you like it, then you better put a stamp on it 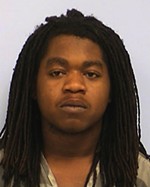