How Not to 'Stop Patriarchy'

New York group has a curious way of "helping" 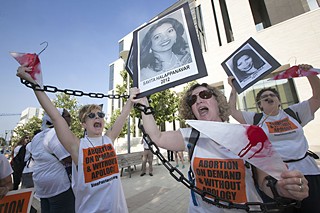 They were cloaked in black chains, holding bloody clothes hangers and chanting, "Abortion on demand without apology!" Protesting outside the Austin federal courthouse during the trial to overturn Texas' abortion law last week, members of the national abortion rights group Stop Patri­archy likened forced motherhood – that is, no access to abortion care – to female enslavement. The fiery rhetoric and dramatic display caught the eyes of local TV news – one newscast reported, "Those orange shirts were back to protest the law."

But local reproductive rights leaders quickly distanced themselves from the out-of-state organization, and a coalition of reproductive justice activists and pro-choice groups signed a letter in heated opposition to Stop Patriarchy. Some of the same signers issued a string of Twitter jabs, with hashtags #ExposeStopPatriarchy and even #FuckStopPatriarchy.

Why do local reproductive rights groups oppose an organization that, on its face, seems to align with their message?

Among the litany of criticisms, prominent is that the New York-based group did little to meaningfully collaborate with homegrown advocates, who have spent years combating state anti-abortion laws. Instead, the group hopped on its "Abortion Freedom Ride" Texas tour – a monthlong, protest-filled road trip – and asked for support from local organizations while diverting financial resources and energy away from those local groups. Others say Stop Patriarchy's rigid anti-sex-worker and anti-pornography beliefs fail to support bodily autonomy and female empowerment. Additionally, Austin advocates consider Stop Patriarchy's bombastic tactics intimidating, disruptive, and counterproductive to the local efforts.

Moreover, Texans for Reproductive Justice have called out Stop Patriarchy for appropriating Civil Rights movement language (e.g., "freedom ride" and "female enslavement") and thereby minimizing slavery. Sarah Tuttle of the abortion assistance group, the Lilith Fund, finds this especially troublesome. "Many of our clients are women of color, and our ethics are very much based in the reproductive justice movement and this idea of intersectionality," said Tuttle. "So when you deploy images of slavery and use past and current suffering from racism to get your message across, we and our allies find that offensive." When Tuttle and others confronted Stop Patriarchy about its use of "slavery" language, they say, they were met with silence or dismissal.

Mary Lou Greenberg, abortion rights activist with Stop Patriarchy, explained the group's intentions. "The whole purpose is to turn the tide and change the terms of things, to stop this whole war on women as concentrated on the attacks on abortion. And right now, Texas is ground zero for that. That's why it's so significant for people across the country. That's why we're here." Greenberg also wasn't shy to criticize the perceived shortcomings of local groups. "There have been important things done by people here, but it's not enough; and that's not to denigrate what has been done, but the efforts need to call national attention to the issue, as well."

"The main reason we are opposed to Stop Patriarchy is because they are not invested in the long term success of the reproductive justice movement in Texas," said Sheible, a UT-Law student. "They are intentionally creating media strategies that focus on extreme and divisive rhetoric so they make headlines. But what it leaves here in Texas is a public that is confused about the face of our movement.

"This organization has raised tens of thousands of dollars to come to Texas, yell, scream, have a bus tour, and then leave," she continued. "Rather than helping the movements that are already going on, Stop Patriarchy is detracting from our efforts."

Stop Patriarchy netted more than $30,000 from a recent Indiegogo fundraising campaign, with no indication it would be using a cent of those funds to help Texas women. Instead, the money will help fund roughly 25 activists' travel expenses across Texas – airfare, van rentals, gas, and housing. It'll also cover the costs of stickers, banners, and eventually, a film of the "Freedom Ride" tour. Sheible points out, Stop Patriarchy's national visibility has the potential to "enormously magnify" the funding pool for local groups. "If Stop Patriarchy is willing to fundraise for Texas reproductive rights groups, that would go a long way to restoring their reputation in this state. But for now, it looks like every dollar they're raising is going to pay for more stickers."

If Stop Patriarchy's ostensible aim is to support women affected by the anti-abortion law, why not directly assist reproductive health care? Greenberg says local abortion funders are doing a "tremendous job," but (repeating the Stop Patriarchy mantra) it's still not enough. "This is a national battle, and what those services that enable people to get essential care are not, is a strategy for turning back this nationwide assault on women." Local reproductive rights advocates respond that the national group will only serve to harm the Texas pro-choice movement, by severely polarizing the terms of the debate, so that many Texans are no longer interested even in discussing the issue. "That's the danger Stop Patriarchy represents," said Sheible. "And that's what we're trying to avoid."

While local newscasts might conflate Stop Patriarchy with the return of the "orange shirts" – the thousands of citizen activists who filled the Capitol during the HB 2 debate last year – Stop Patriarchy wasn't in fact present for the epic filibuster; its members weren't in attendance for the House and Senate committee hearings, nor the floor votes on HB 2. Their transient presence, say local activists, is a central problem.

"Long after Stop Patriarchy is gone, Fund Texas Women will still be here; we will still be dealing with the aftermath of HB 2; we will still be fielding calls from people who need to get an abortion, and we will be the ones that help make abortion more accessible," concluded Sheible.