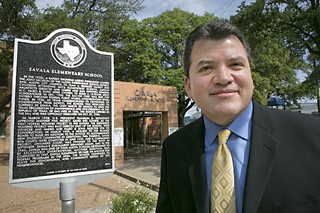 Good news for Austin ISD: 70 of its schools earned a total of 205 Distinction Designations from the Texas Education Agency under the new accountability system. Now hands up if you have any idea what that means.

The TEA released its latest school accountability ratings on Aug 7, and statewide, 1,106 of Texas' 1,227 school districts and charters achieved the state's standards or reached alternative standards. Out of the remaining 121, a total of 111 were classified as "Improvement Required," and 10 were not rated. These were actually better results for public school districts than charter operations: 93% of ISDs and CSDs reached the new metrics, while only 78% of charters hit the mark. However, in a statement, Com­mis­sioner of Education Michael Wil­liams said, "Texans should be pleased to see the vast majority of districts, charters, and campuses are meeting the standards set in the second year of the state accountability system."

The favorable news for AISD is that, of its 121 campuses, "110 met all standards and all components of the accountability system," said Interim Superintendent Paul Cruz. However, that is still not a 100% pass rate. Last year, 11 campuses were classified as "Improvement Required," meaning they required some level of state and local intervention. That total dropped to nine this year, but many of the same names are back on the list. Three high schools – Eastside Memorial, LBJ, and Travis – missed targets for a second year, as did middle schools Garcia, Martin, and Pearce. However, it was good news for Rodriguez Elementary, Dobie Middle, and Lanier High, all of which made state minimums after missing the mark in 2013.

There will be undoubted disappointment that the same campuses – mostly in East Austin – that had trouble in the past have trouble now, especially in the ever-problematic middle school years. This only places extra pressure on AISD to get some real results this fall when Pearce and Garcia open as single-sex academies, and LBJ will face reconstitution. Meanwhile, at the top of the stack, the same campuses that achieved high scores under the old system – Anderson High, Liberal Arts and Science Academy, the Ann Richards School for Young Women Leaders, plus Blackshear, Graham, Gullet, Hart, Reilly, and Zilker elementary schools – achieved every available Distinction Designation.

Of course, the big question is, what does that all mean? For years, Texas teachers and parents had contended with a seemingly simple accountability system. Cam­puses were exemplary, recognized, academically acceptable, or academically unacceptable. However, underlying that system was a complicated scoring matrix that split children up by ethnicity and income, then scored them all separately in key subject areas. Miss even one of those cells – or as many saw them, tripwires – and your district got the scarlet letter of an AU ranking.

AISD campuses classified as "Improvement Required" for the 2014 school year

The new system only has two rankings: Met Standard, or Improvement Required. However, those rankings are based on hitting four indices:

Each index is built on several metrics, and on top of that, campuses can get Distinction designations in specific areas like social studies or closing gaps. So, arguably, it's not much more transparent than the old system. Cruz said, "I've been asked that by a few business folks and Realtors who want to explain to folks wanting to move into the Austin area," and so he has instructed all campus principals to hold information sessions for parents and stakeholders still struggling to work out the differences and similarities between the ranking systems.

Index 4, postsecondary readiness, was the real trouble spot for AISD: six of the nine Improvement Required campuses missed that target. For three of the high schools, that was the only target they missed, and it was a shifting target. In 2013, Index 4 was calculated based on two components – graduation score and graduation plan – and was only applied to high schools and districts. In 2014, not only were elementaries and middle schools added to the mix, but now they were graded in STAAR Final Level II, college-ready graduate, in addition to graduation score and graduation plan.

If this all seems like the traditional Texas school system number soup, that's because it is. What's worse is that school districts were often left in the dark about the ingredients until the last moment. Cruz called the changes "challenging," noting that his office had only received the last target days before the rankings were released. He added, "In the past, we knew well in advance the way the accountability system was going to begin, what was the next year, and how it's going to roll out."