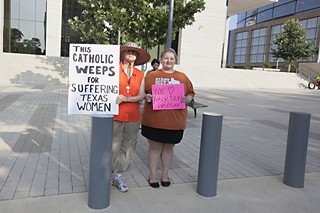 Pro-and-anti-choice demonstrators outside the federal courthouse Monday, as lawyers on both sides of the abortion debate squared off. See "'We Won't Back Down.'" (Photo by Jana Birchum)

› City Council, knee-deep in budget review, resumes formal meetings today (Thursday, Aug. 7) with a daunting agenda, including setting the November election (and transportation bond proposal), board and commission revisions, and a host of other matters. If you're attending, this week it's at Commissioners Court, 700 Lavaca. See "Council: Come As You Are."

› Mayoral candidate Steve Adler formally filed for the ballot this week, and announced his support for a property tax homestead exemption, to be phased in over four years. His major opponents, Council Member Mike Martinez and Mayor Pro Tem Sheryl Cole (not yet filed), responded that Adler should explain how he intends to recoup the $36 million cost of such an exemption.

› As of Wednesday morning, 23 mayoral and Council candidates had filed their official ballot applications; more than 70 have filed campaign treasurer designations. The ballot deadline is Monday, Aug. 18.

› Wanted: AISD candidates. At press time, there had been no new filings for the November board elections since Robert Schneider (District 7) and Monica Sanchez (District 6) last week. At-Large incumbent Tamala Barksdale and potential District 6 challenger Paul Saldaña are expected to make announcements next week.

› "That's doable," said Bernie Ecclestone's attorney Sven Thomas, when asked by the judge in Ecclestone's bribery trial in German court if the Formula One kingpin could make a $100 million settlement payment "within the week." The settlement ends the trial of the billionaire, with no admission of guilt; he is free to return to his control of the sport and try to put its financial house in order.

› On Aug. 13, the Sunset Advisory Commission is expected to take a vote on a controversial recommendation that would shutter six state supported-living centers, including the Austin SSLC on West 35th. Meanwhile, the center, which houses 280 intellectually and developmentally disabled and medically fragile residents, has its own plans to close down seven cottages and move out 72 residents by the end of November.

› Seems like Gov. Rick Perry is ready to risk embarrassing himself on the national stage again. After flaming out in the 2012 presidential race, he has formed a new federal PAC, the imaginatively named RickPAC, as the first stage in a presumed 2016 run.

› Perry may run nationally as the border security guy, but he still faces tough questions at home. The Legislative Budget Board met on Aug. 5, to discuss Perry's unilateral decision to switch $38 million intended for law enforcement radios to pay for National Guard border patrols, and whether that operation is working.