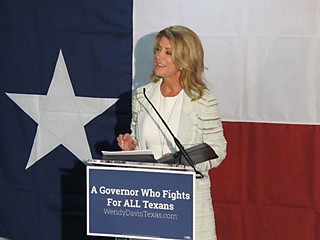 Secretive corporations. Gouging insurance companies. Dangerous doctors. Accord­ing to Sen. Wendy Davis, her opponent for the governor's mansion, Attorney General Greg Abbott, has been using his office to protect all those groups, and his campaign has been pocketing some pretty impressive campaign contributions in return. At an Aug. 5 press event in Austin, Davis went full bore after her rival, dubbing him "an insider who is not working for you."

The key to a good campaign is telling a good story, and on that front Davis' campaign had been floundering for months. Smeared as "Abortion Barbie" by the right, efforts to refocus the narrative on education went nowhere, and it began to appear that Abbott should just start picking out curtains for the governor's mansion. But in the last few weeks – notably ever since Rep. Chris Turner, D-Fort Worth, took over as campaign manager – Davis has found new traction with a full-frontal assault on Abbott's ethics. "It seems like every few weeks," she said, "we hear of another instance where he's siding with insiders when he knows it will hurt hard-working Texans."

The first accusation relates to a legal opinion. In the wake of the West chemical plant explosion, Abbott stated that local government and state agencies were not obligated to release records of whatever dangerous, toxic, or explosive chemicals were being stored by private companies. Tech­nic­al­ly, under state law and Homeland Security regulations, Abbott's ruling was correct. But he disappeared in a PR quagmire when he clarified that residents could simply ask their friendly neighborhood chemical company what was in those unmarked barrels. How would Texans even know which companies to ask? "You know where they are if you drive around," he replied.

Democratic groups responded via YouTube, with residents recording exactly what happened when they tried to follow Abbott's advice (the quick answer is that they were generally shown the door). For the Davis campaign, it was the first real crack in Abbott's armor, as they launched the "Texans Deserve to Know" tour.

The narrative tightened on Abbott with a May ruling by District Judge Scott Jenkins, who excoriated the AG over a deal with Farmers Insurance over massive price hikes, in a lawsuit that's been going on since 2003. Jenkins rejected the latest deal struck by Abbott and Farmers, calling it "deferential" and telling Deputy Attorney General David Mattax, "You don't just have to lay down to Farmers." (That's not the only legal slap Abbott has taken recently: On June 17, the 5th Court of Appeals allowed former Assistant Attorney General Ginger Weatherspoon to move forward with her whistleblower lawsuit, alleging her bosses tried to coerce her into lying under oath. Abbott's office has now asked the Texas Supreme Court to dismiss her suit, claiming she didn't follow all the necessary rules to claim whistleblower protections.)

The most recent addition to the accusation pile reads more like a true-crime story than political fodder. Call it the case of the sociopathic surgeon. In a little under three years, actions by neurosurgeon Dr. Chris­to­pher Duntsch led to the deaths of two people and the permanent crippling of four others – all in what were supposed to be minimally invasive procedures. This should have nothing to do with Abbott, but in 2013 his office intervened in a lawsuit against the Baylor Regional Medical Cen­ter of Plano, at which Duntsch practiced. The families of Duntsch's victims claim that Baylor willfully ignored complaints against Duntsch, even while his own colleagues were alleging incompetence and drug use. (One even compared him to Hannibal Lecter.) "The hospital knew about the surgeon's history," Davis claims, "but allowed him to keep operating anyway." Abbott intervened in order to defend the constitutionality of a tort reform law, which would limit the amount of damages the plaintiffs could receive.

What's the unifying factor in all these allegations? That Abbott accepted big campaign donations from each of these entities. Dangerous chemicals? Try $50,000 from Charles and David Koch, plus another $25,000 from Chase Koch, son of Charles. Insurance? $75,000 from the Farmers Employee PAC. Medical malpractice? $350,000 from Drayton McLane, chair of Baylor Scott & White Health, owners of the Baylor Center. Add on to that another half a million from firms that received big contracts from the controversial Cancer Preven­tion Research Institute of Texas, on whose board Abbott sits.

Abbott's campaign has tried to debunk the connections, with spokesman Matt Hirsch claiming his boss "has been able to retain the independence that allows him to investigate and even prosecute companies that gave him political contributions, showing that he is committed first to upholding the laws of the state of Texas." But Davis says there's a real difference between herself and "so-called leaders in this state who have sold their interests out in favor of their own." She added, "Voters in this state need to know that there is a candidate for governor who is going to stand for them and fight for them."