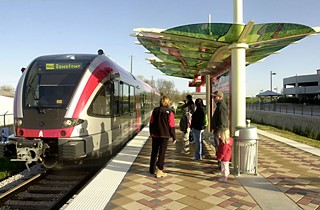 While opponents of the urban rail plan have relentlessly voiced that opposition for months, official agencies such as Capital Metro and Project Connect "are in a strict 'education only, no advocacy' position," says Cap Metro's John Julitz – as is required by Texas state law regulating the use of public funds for political advertising (Texas Election Code § 255.003). Nevertheless, not everyone agrees on what constitutes "political advocacy."

Writing on July 11 to Capital Metro board members, AURA's Project Connect Central Cor­ri­dor Working Group co-chairs Brad Absalom and Marcus Denton questioned what they called Project Connect's "aggressive marketing campaign." While recognizing that "some advertisements seem intended to convey basic information," they argued that other ads, such as the radio campaign, "seem like political advocacy." The letter does not cite any particular passages or statements the writers find objectionable, but argues instead that the campaign is unethical by omission "since the rest of the content makes no mention of opposing viewpoints or data, this advertising campaign is public relations, not genuine engagement."

In response to AURA's letter, Project Connect's Kyle Keahey described the $157,000 campaign, which began on June 2 and concluded this week, as an "educational and project awareness effort in mass media." He also said that all educational material "is reviewed by both project management team members and legal counsel to verify content and ensure compliance with election laws."

Denton and Absalom responded that, while they don't question the Project's legal opinions, they are "much less confident that you [Keahey] understand that spending taxpayer dollars promoting a controversial urban rail proposal is unethical and erodes public trust." Indeed, they say, the campaign should have included materials arguing against itself: "opposing viewpoints and data" – a presumed obligation to undermine the project altogether, while doing opponents' work for them.