Last Call for DWIs at AFD? 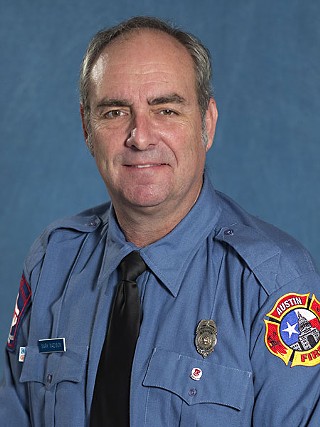 AFD's Mark Madison was suspended indefinitely for an alleged DWI.

The surprise surrounding the recent indefinite suspension of alleged drunk-driving firefighter Mark Madison wasn't the revelation that some department staff are drinking and joyriding, but rather that it took Austin Fire Department Chief Rhoda Mae Kerr so long to drop the hammer.

On July 11, Madison, a 29-year AFD veteran who (according to The Texas Tribune) receives the highest salary of any AFD firefighter, was "suspended indefinitely" (i.e., terminated, under civil service) after crashing his car in North Austin the evening of May 10. Police responding to the scene smelled alcohol on Madison's breath, and reported that he'd stumbled, mumbled, and nearly fallen down. He told authorities he'd consumed "a few" drinks that evening. In a May 30 interview with members of the Professional Standards Office, Madison admitted to actually having between 10 and 12 drinks.

Madison is the sixth firefighter suspended for a DWI since January of 2013, but the first to incur a penalty lasting longer than 90 days. And even that figure's somewhat of an outlier; the recipient of the 90-day suspension, firefighter James Doyle, was facing his third DWI charge since 2006 when Kerr handed down her decision in January 2013. Doyle agreed to alcohol counseling, randomized testing, and a one-year probation period, as well as assuming the understanding that another violation would result in an indefinite suspension.

Otherwise, Kerr has mostly issued a series of suspensions stretching between 10 and 15 days, despite admissions that some of the suspended, including firefighters Jason Bryant (suspended for 10 days in August) and Michael Nimtz (15 days in May) were driving after consuming upwards of 10 alcoholic beverages in a sitting.

Madison's suspension is the second DWI-related sanction handed down to members of the AFD since Kerr's November 2013 memorandum informing her staff that "prior efforts, including temporary suspensions of 10 days, were not having their intended and desired effects, to wit, to curtail alcohol abuse by Department Personnel, particularly driving while intoxicated." In the memo – apparently distributed by Kerr because 38% of the AFD suspensions mandated between Feb. 1, 2009, and Oct. 4, 2013, had been DWI-related – Kerr went on to explain that "future first-time 'driving while intoxicated' violations would result in a disciplinary action, up to and including indefinite suspension." Madison reportedly acknowledged receipt of this memorandum – but still decided to drive drunk.

Kerr's explanation makes no mention of the 60-day suspension levied on firefighter Randall Black – who in February was stopped for speeding on I-35 and subsequently arrested for DWI – though in her initial memorandum sent out to the department, Kerr wrote that "every alcohol related discipline case involving sworn and non-sworn will be judged on its own merits.

"I will decide the appropriate disciplinary action, which may include days off up to and including the indefinite suspension/termination of the employee."

How exactly Chief Kerr delineated between what constitutes 60 days and what an indefinite suspension remains unclear, though a comparison of the two memos suggests that Madison – who could barely stand, and had crashed his car so hard into a guard rail that he broke his front right axle – was significantly more blitzed than Black, whose rap sheet in this instance entails little more than "a strong odor of an alcoholic beverage" on his breath. An AFD public information manager declined to elaborate; meanwhile, Austin Firefighters Association President Bob Nicks told KLBJ-AM that Kerr's "tactic" is "very heavy-handed."

"If our investigation shows through an abundance of evidence that someone at our department, whether they're sworn or unsworn, committed a violation of DWI, we're not going to tolerate it," he clarified at the time. He has not had to fire any officers for that offense since.