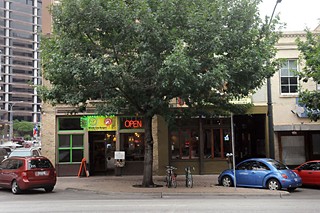 The iconic brick building that houses Wholly Cow Burgers is slated for demolition to make way for a new hotel development Downtown. See "Another Hotel Checks In on Congress." (Photo by John Anderson)

› Meanwhile, candidates accumulate to succeed the current Council: As of Wednesday, no fewer than 71 have expressed an official interest in either the mayor's seat or one of the 10 new district seats. Follow Newsdesk online or see the Elections page at austinchronicle.com/elections.

› Wade Atwood, the man accused of hitting and killing @ATXHipsters handler Kelly Noel in May, was indicted Tuesday on a misdemeanor charge of driving while intoxicated. The grand jury reportedly considered charging Atwood, 40, with intoxication manslaughter but ultimately declined to do so. Atwood was arrested and charged with DWI after registering a blood alcohol level of .102 shortly after his vehicle collided with Noel. A court hearing is currently set for Aug. 26.

› The city of Austin and the Barton Springs/Edwards Aquifer Conservation District have expressed an official lack of confidence in the Texas Dept. of Transportation's environmental impact statement on State Highway 45, which effectively greenlights the project. The city has asked the agency to withdraw the statement and BSEACD officials have questioned whether the study is complete.

› Admiral William McRaven – the man who led the operation to kill Osama Bin Laden – has been named as the sole finalist to become the UT System chancellor. McRaven, who has faced international controversy over the military's increased use of special ops forces outside of combat zones, will replace Francisco Cigarroa.

› UT Football coach Charlie Strong continues to clean house at Red McCombs stadium, with two players suspended over a sexual assault allegation, and six more kicked off the team for NCAA infractions. The big questions now: How will the boosters react, and why didn't Mack Brown take these kinds of steps when he was in charge?

› Populist crowds are gathering in protest around this week's American Legislative Exchange Council annual meeting in Dallas, July 29-Aug. 1. Under the theme of "Don't Mess with Texas," various activist groups will be holding rallies and protests near the Hilton Anatole. For more info, see Facebook: Don't Mess With Texas, ALEC.

› Another bad week for conservative gadfly Michael Quinn Sullivan. Last week, he was fined $10,000 for failing to register as a state lobbyist: The 7th District Court of Appeals has reversed the dismissal of a libel lawsuit against GOP attack publication AgendaWise, which he founded.

› Court time for Ken Paxton? Texans for Public Justice has filed a felony criminal complaint against the GOP nominee for Attorney General, alleging he failed to register as an investment adviser. If indicted, he could be removed from the November ballot.