Council on Transportation: Pondering the Bond

On Aug. 7, Council will discuss putting a $1 billion bond proposal on the Nov. 4 ballot 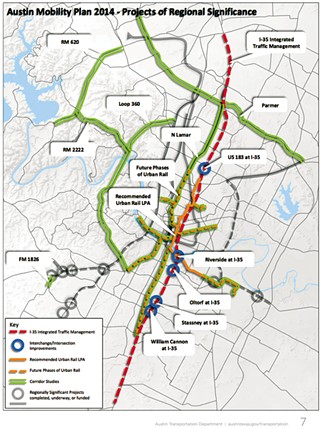 City Council returns from its summer break this week – although not straight to its usual digs in the City Hall meeting room, which is undergoing renovations in preparation for next year's 11-member Council. Among the tasks for the next formal meeting (Aug. 7 at the Commissioners Court, 700 Lavaca), Council is expected to decide whether to place a $1 billion bond proposal on the Nov. 4 ballot, in support of the Strategic Mobility Plan – having already unanimously endorsed the plan itself at its last meeting on June 26.

As currently proposed, $600 million of the bonds, if endorsed by the voters, would fund urban rail (aka "Project Connect"), and cover a little less than half the rail project, estimated at $1.38 billion in total. If the voters approve, the city would apply for matching funds from the Federal Trans­portation Administration – the planners believe the project should succeed, but the local bond issuance would finally be dependent on FTA support – which could take several years for approval. Additionally, the bond package would include $400 million for road improvements. To prepare for a November vote, Council approval of the precise package and the specific ballot language needs to be ready by mid-August – hence the Aug. 7 deliberation.

The rail project, as proposed by the Project Connect team and recommended by the Central Corridor Advisory Group and then endorsed by Council and the Capital Metro board, consists of a 9.5-mile urban rail route from Grove Boulevard on East River­side, across a new bridge over Lady Bird Lake, up Trinity Street in Downtown, through the UT campus on San Jacinto, following Red River to the Hancock Center, and taking a tunnel at Hancock before following Airport Boulevard to ACC Highland. (See the plan details in "Three Project Options," June 13.)

The remaining $400 million of the bond package would target a variety of road projects, mostly along I-35, but also elsewhere in the city. While "the Council retains the final authority to put anything on the ballot," Council Member Mike Martinez told the Chronicle, "The platform that we will be working from is the Strategic Mobility Plan." Here's a summary of the major road projects included in the plan:

• $81.5 million: SH 71, "direct connectors" to the airport for automobiles, and "track bed, structures, and drainage necessary for a future urban rail extension."

• $34 million: The U.S. 183/Riverside interchange, constructing "a new grade-separated overpass and interchange," also in order to remove obstacles to expanding rail to the airport.

Leading up to this decision over the past year, there has been plenty of debate concerning the overall proposals, with some residents passionately fighting the plan (see "Dissenting Voices," June 13), and others preferring either rail or road improvements. Officials believe that bundling rail together with road projects will garner broader public support.

The combination seems to be paying off. On June 26, following Council's approval, the Greater Austin Chamber of Commerce's board of directors voted to endorse the Strategic Mobility Plan. Cham­ber Senior Vice President Jeremy Martin called the addition of road improvements "very important, because the number one thing we hear from Chamber members is that we need to improve traffic congestion, and the Cham­ber has long supported a multimodal approach to improving regional mobility. ... It's important that we pursue mobility improvements in a systemic fashion. There's no one single project that will fix traffic, and the improvements are needed citywide." Referring indirectly to the length of time required for the rail project, Martin added, "Presenting improvements that everyone can see in their daily lives is very important."

Jeb Boyt, chair of the Alliance for Public Transportation and a District 7 Council candidate, noted, "Look, we want it to pass. These things pass much better when they're bundled together. The experience we've had in working on these transit bond elections has clearly shown that that's the way it goes."

Regarding the shape of the overall proposal, Martinez said, "There certainly could be some tweaks and amendments to the plan, or there could be things that are in the plan that aren't put onto the bond package because there are other options for funding sources for those projects." But he emphasized that, "Yes, the Strategic Mobility Plan was unanimously adopted by the Council [in June], so it is the foundation of what we believe are the priorities as it relates to road projects moving forward."

Martinez said they've had sessions with legal counsel dealing with the specific ballot language. While the official language is still undecided, Martinez said the exact wording would likely "preclude the City Council from spending any funds on urban rail until we've received a federal match from the federal government on the project."

The Strategic Mobility Plan, as endorsed by City Council, is posted with this story online. We'll have more on the proposed November bond package in next week's issue, available on the morning of the Council meeting, Thursday, Aug. 7.