Another Hotel Checks In on Congress Avenue 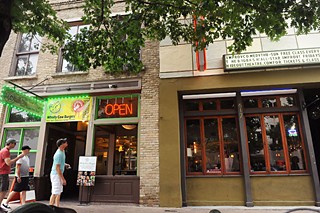 Developers plan to demolish the building at 619 Congress (l) to build a 32-story hotel; owners of the Hideout next door fear the demolition and construction will harm the building and their business. (Photo by John Anderson)

With few options left for opponents to secure concessions from a developer, a proposal for a new Downtown hotel heads to City Council Aug. 7 for approval of a zoning change. Plans call for rezoning 619 Con­gress, which houses Wholly Cow Burgers, and demolishing the circa-1850 building to accommodate a 32-story boutique hotel on the property and an adjoining surface lot, home of the Kebabalicious food truck. The hotel will be called Aloft & Element Austin Downtown.

The proposal has won the recommendations of several city commissions that reviewed the plans. While lauding the hotel's design concept (with the exception of a windowless south-facing fire wall), the commissions have also encouraged the developers – Conventus Corporation and Finley Company, along with their attorney Richard Suttle – to continue working with their next-door neighbors at the historic 617 Congress, home of the Hideout Theatre and Coffeehouse. Both the Hideout and the building's owner fear that the demolition and subsequent construction will harm the building's structure and damage the Hideout's business operations.

The conflict has forced the Hideout's improv comedy community to take a stance opposing the development – it's not a role they particularly enjoy, but they're trained improvisors, so their testimony before the Planning Commission earlier this month was both compelling and entertaining.

"If they could just plop a hotel down next to us with no construction we would be 100% behind it," Hideout co-owner Jessica Arjet told the commission. She said the Hideout had asked the developers to provide a structural engineer to assess the potential impact demolition and construction would have on their building, especially a wall that the two buildings share.

Suttle told planning commissioners that his clients would repair any damage that may occur to the wall, as per a "party wall agreement" between the property owners.

Jeff Howard, representing the owners of the 617 Congress property, put forth several arguments against the development, but none of them stuck. He noted that the hotel is planned for one of the last historic blocks on Congress Avenue that has largely gone undeveloped, save for some building facade changes over the years.

Under the proposed zoning, hotel developers would obtain a setback change from 60 feet to 40 feet, to allow for the added height. There are no plans for on-site parking (as permitted under new Downtown rules), and ADA parking spaces will be located off-site. Developers still need to obtain approval for a reduction in the number of required loading docks, from two to one.