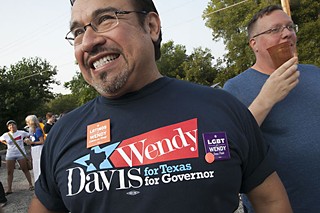 Travis County Dems and Battleground Texas teamed up July 19 for a campaign kickoff and town hall, drawing no shortage of Wendy Davis supporters like Saul Gonzalez. (Photo by Jana Birchum)

› Meanwhile, the first campaign finance reports for November's historic 10-1 Council election were posted last week, and the official filing period for office opened July 21 (through Aug. 18). As of Wednesday morning, a handful of the nearly 70 declared candidates had filed. See the Chronicle's Elections page for more.

› The Travis Central Appraisal District is asking County Commissioners for a $2.9 million budget increase to help the agency improve its appraisal process in light of mounting concern over potential inequities in the appraisal system.

› In response to the refugee crisis at the Mexican border, Gov. Rick Perry announced Monday he would be deploying 1,000 National Guard troops to the Texas border to join the Department of Public Safety surge called "Operation Strong Safety." The governor didn't say if the troops would employ a "Cover 2" defense or blitz their linebackers.

› The Texas Ethics Commission found Michael Quinn Sullivan, head of right-wing think tank Empower Texans, guilty of failing to register as a lobbyist while he was working to influence legislation in 2010 and 2011. Slapped with a maximum fine of $10,000, the conservative activist continues to argue the disclosure law is unconstitutional, and intends to appeal the ruling in district court. See "Ethics Commission: 'Mucus' Quacks Like a Lobbyist" for more.

› This week, President Barack Obama signed an executive order banning workplace discrimination for gay, lesbian, bisexual, and transgender federal contract workers and federal government employees. While the order covers 28 million workers, it does not extend to all employees nationwide. The order does not provide exemptions for religious entities.

› The Affordable Care Act was dealt a blow Tuesday when the D.C. U.S. Court of Appeals ruled that the government cannot subsidize insurance bought through the federal marketplace. In Texas, the ruling could end assistance for as many as 1.6 million policy-holders by 2016. A separate ruling from a Virginia federal court, however, affirmed the subsidies.