Schneider faces two challengers as he seeks a fourth term

Austin ISD District 7 is the largest of the seven district trustee seats, and Robert Schneider has represented it since 2002. Now the retired computer researcher wants a fourth term on the board, but a pair of challengers wants to send him to full retirement.

A former teacher in Washington state, now a Realtor, Theresa Bastian describes herself as "super passionate about public education." Meanwhile, Yasmin Wagner, a creative director at computing firm AMD, said, "I want to see a change in our schools, and as a resident of Southwest Austin, I feel that we've gone too long without a change."

Before campaign season started, Schneider was resigned to facing challengers. He did so in two of his last three races. He noted a strange trend: As with those challengers, both Bastian and Wagner live near and have kids who came through Kiker Elementary. He said, "I don't intend to criticize an entire neighborhood, but it does seem there's a small part of that community that thinks they have all the answers."

The big question for Schneider is simple: Why run again? After all, he recently retired as a UT researcher in massively parallel computing. Moreover, this would be his fourth four-year term, and most trustees quit the unpaid, time-demanding positions after only two. His argument is simple: There's too much work to be done. He said, "There are some major, significant issues that are going to be facing the district – hiring the superintendent, the budget, the next legislative session." If he wins re-election, he will be the most experienced board member. In fact, due to turnover in the 2012 election, and the decision of three incumbents not to run again this year, he will be the only incumbent with more than four years' experience. While Bastian sees reason for optimism in having so many new voices, a returning Schneider would become an automatic contender to lead the board. He said, "I do want to run for board president, but first I have to be re-elected to the board."

While Schneider received plaudits as a vocal critic of former Superintendent Meria Carstarphen, Wagner said his "negative voice" has sometimes hurt his district. "I think he has been a challenger on the board, I don't think he has been much of a collaborator."

Bastian makes no direct criticism of Schneider, beyond a general feeling that he has not been as good at communicating with his district as other trustees. Her more general complaint is that "District 7 seems to be on a bit of a disconnect. ... We feel that we're not supported by AISD." That sense of discontent was expressed last year, when the area's voters roundly rejected the district's four bond proposals. Bastian called that a protest vote, adding, "There isn't a parent that isn't supportive of public education, but this district voted down the bond measures."

Wagner sees the negative vote as having two roots. First, frustration over high school overcrowding: Bowie High School is short 500 seats; while voters approved money to buy land for a new south high school in 2008, seemingly nothing has happened to move that plan forward. Second, she backs Bastian's claim that the district is too dependent on top-down, centralized decision-making. She said, "I feel we've lost a lot of the organic communications at the campus level."

That makes overcrowding a flash point. As Bastian notes, that's especially dangerous in District 7, where more affluent families have more options, neither of which she likes. She said, "I don't believe that private schools or charter schools are good for the city."

That means District 7 has been touted as the ultimate argument for systematic redrawing of attendance-zone boundaries, to both reduce excessive commutes for students, and more evenly spread the load across the area's schools. As a member of the district's Boundary Advisory Committee, Wagner says "there are going to have to be decisions made, and they won't be easy ones." For her, that's where the early, informal outreach is vital, to get the families engaged, so no decision becomes a bombshell.

However, Bastian warns against doing anything to force parents to send kids to a campus they have not chosen. Instead, she suggests that AISD get more creative, and proposes magnet programs as a solution to both overcrowding and students leaving the district. She said, "What if there was a [Liberal Arts and Science Academy] south? What if there was a [Science Technology Engineering Math] center, say at Crockett? There are kids who are transferring out who might be tempted to attend."

Wagner counters that the district must be extremely cautious about how it uses magnets. She uses LASA as an example: While it has been successful, it has done nothing to raise scores on the rest of the LBJ campus. She said, "We really need to look at the health of the existing schools [and] make sure we don't inadvertently cannibalize nearby schools."

Schneider is equally cautious about misplaced magnets. He has also spent years fighting for a new high school, and argues much energy was spent fending off bad ideas. On one side, he had fellow board members push plans like buying a strip mall and turning it into a health center. Locally, he fended off residents who wanted to reconfigure feeder patterns and Frankenstein an exemplary campus. He said, "We don't build high schools to be exemplary. We build schools to relieve overcrowding." For families eager for news, he said he expected the impasse to break, and planning to move quickly – "quickly in terms of the district acting on things."

Schneider's concern is that the election concentrate on these kinds of issues, and not become a barometer of wider concerns about Texas public education. After all, issues like testing and Robin Hood – the complicated system of school finance recapture that has seen Austin send billions to state coffers while its own needs go unmet – are in the hands of the Legislature and the courts, not the district. "I hear from people, 'Well, I'm going to stop the amount of testing.' Well, that's not what trustees do." 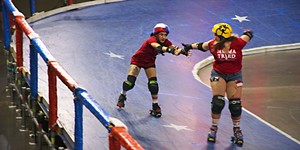