Then There's This: Whither Vested Rights? 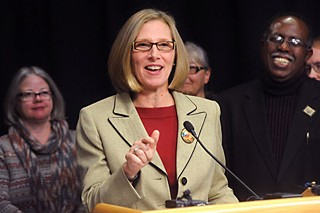 "This is very close to the project [developers] were looking at in the first place, and I don't see much improvement." – Council Member Laura Morrison (Photo by Jana Birchum)

Just two weeks after approving a new Vested Rights Ordinance – ostensibly revised to satisfy litigious developers and their meddlesome friends at the Texas Legis­lature – the City Council rejected the first development proposal to be considered under the new rules.

Whoops. That's not what real estate lobbyists had in mind when they pressured the city to rewrite the regs, in deference to an attorney general opinion that said the old "grandfathering" ordinance violated state law.

Will Council's denial of the proposal come back to haunt the city when the Lege convenes in January? That's unclear at this point, but lawmakers have never been shy about proposing legislation that threatens Austin's rulemaking ability to protect water quality in the Barton Springs segment of the Edwards Aquifer.

You'll recall that after the AG opinion in late 2012, the Council dutifully repealed the old "grandfathering" ordinance and city staff spent more than a year rewriting a new one to align with state law. Council members – namely Bill Spel­man and Laura Morrison – then spent weeks whipping the draft ordinance into shape before it was finally adopted on June 12.

The first case out of the chute – a proposed condo development called Harper Park 2 – came before Council June 26 under the new ordinance's Project Consent Agree­ment exception. That exception allows developers to skip the boards and commissions process and go straight to Council for approv­al if it's evident that the plan carries substantial environmental and land-use compatibility features. But the Hail Mary exception plan appears to have been hastily rushed before Council, resulting in a 3-4 denial, with Morrison, Sheryl Cole, Mike Martinez, and Kathie Tovo comprising the majority. Spelman had moved for approval of the plan; Mayor Lee Leffingwell provided the second, and Chris Riley added the third vote. Like other major decisions made in recent months, this one, too, came after 1am – it was the last item Council considered before its July break.

Morrison was the first to say she couldn't vote for a project that would have five times as much pavement as is allowed in the Barton Springs zone. Noting the "extraordinary impervious cover" – about 75% compared to 15% allowed under the Save Our Springs Ordinance, she did offer that the project consent exceptions in the new regs "are going to be a good tool if we can really come to agreement where there's some [environmental] improvement. But this is very close to the project they were looking at in the first place [referring to the proposal's past life as an office development], and I don't see much improvement."

'Better Than the Alternative'

But Leffing­well and Spelman pointed out the benefits derived from allowing developers to build the condo proposal rather than the original proposed office complex: Pollutant discharge would be reduced by about two-thirds, and the Heritage Tree Ordinance and other tree regulations would apply. Develop­ers would also kick in $150,000 to the city's mitigation fund used to acquire water quality protection land. "Seems to me this is at least conceivably as good a deal as we're likely to be able to cut," Spelman said, before asking Planning and Development Review head Greg Guernsey if he agreed they were looking at the best plan possible.

"I think this is a pretty good deal, given the alternative," Guernsey replied. In fact, Harper Park's enviro improvements were what led staff to recommend approval under the Project Consent Agreement.

Earlier this year, staff had rejected developers' plans to build 76 detached condos on 17 acres on one of the largest undeveloped sites left in Southwest Austin because the proposal's vested rights claim didn't qualify under the Eighties-era Barton Creek Ordinance. The reason? The ordinance didn't contain a provision for detached condos, as it does for other types of projects. Until that discovery, it was assumed by nearly everyone, including city staff, that Harper Park would easily secure vested rights claims for the condo project, because previous court rulings had already determined that the tract was grandfathered. (It's worth noting here that mayoral candidate Steve Adler has been criticized by some environmentalists for his role as one of the appellate lawyers in this particular challenge to SOS).

In any case, it must have been a godsend for Harper Park developers when, four months after staff's rejection, Council added the Project Consent Agreement to the newly revised Vested Rights Ordinance, enabling Weekley Homes to make another attempt at securing approval, this time with some additional environmental bells and whistles. But those attractions weren't enough to convince a narrow majority on Council, two of whom will be taking on Adler in the mayor's race.