The fist bump heard ’round the world 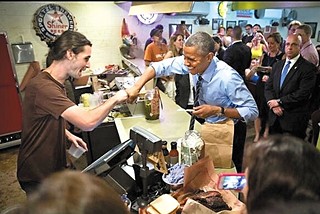 The bump that rocked the world. (Photo courtesy of Doug Mills/Twitter)

Last week, as Chronicle readers undoubtedly noticed, President Barack Obama took a whirlwind tour of Texas to fundraise, meet with residents, and deliver a speech on the economy. Our writers posted two reports on the visit – one on the Downtown speech and its broader implications, one on the Thursday lunchtime visit to Franklin Barbeque to eat lunch and exchange pleasantries with Austinites.

As you probably know, Obama's brief exchange and "fist bump" with Franklin employee Daniel Rugg Webb – who cheerfully demanded "equal rights for gay people" – exploded online nationwide, and as of Wednesday morning, resulted in 55,026 visits and 556 comments – not all of them precisely story-related – to the Chronicle website. The exchange (and photo) quickly became famous.

We're happy to have the traffic, of course – and here, for your Obama memory books, are lightly edited excerpts from our News posts. – Michael King

Before a packed crowd at the Paramount Thursday afternoon, President Obama delivered optimistic remarks that centered on the economy, job growth, and income inequality.

During his speech, which came at the end of a two-day fundraising trip to Texas, Obama also slammed obstinate Congressional Republicans, whom he heavily criticized for shooting down every "serious idea" aimed at strengthening the middle class. Obama pointed to 10 million new jobs, 52 straight months of job growth, a rebounding housing market, and an unemployment rate lower than levels seen in 2008 as signs of economic recovery. "By almost every measure, we are better off now than we were when I took office. But the fact is, we've still got a long way to go," he said.

In his appeal to the middle class, Obama skewered income inequality – fueled by GOP policies – pointing to record corporate profits and executive pay. While we've fared better as a whole, said the president, the ultra-wealthy continue to reap the benefits while wages for the working class haven't kept up with the rising cost of living. "If you work full time ... you shouldn't live in poverty," he said.

The president also took the opportunity to mock GOP attempts at impeachment and litigation against him by members of the Texas delegation for alleged abuses of executive power. He countered that the number of executive orders which include student loan interest rate relief and minimum wage increases for federal contract workers, are the lowest number issued in the past 100 years.

Across the street from the Paramount, a group of immigration reform protesters in blue shirts chanted and waved signs that listed ways the Obama administration could help alleviate the immigration crisis. Among them: Expand DACA (Deferred Action for Childhood Arrivals), ensure DREAMers benefit from DACA, reunite families torn apart by deportation, and take steps to end the widespread incarceration of immigrant communities.

De facto leader Sheridan Lagunas, an undocumented local resident, called on Obama (via bullhorn) to end deportations. Lagunas localized his criticism, expressing his opposition to the Secure Communities program, and said he hoped to highlight the story of undocumented resident Erik Zumaya, an Austin father of six, who was to face deportation last Friday after a 2010 arrest for driving without a license (Good news on that front: Zumaya's lawyer, Boston Cote, tells the Chronicle that in a "rare" move, Immigration and Customs Enforcement has granted Zumaya a last-minute stay of removal, allowing him to remain in the country. Cote attributes the reversal to public attention placed on the case by media outlets and activist groups.)

Immigration reform activists hoped Obama would visit the border to witness firsthand the "humanitarian crisis" unfolding as a result of the influx of thousands of Central American refugee children. An estimated 52,000 unaccompanied child immigrants from the area have illegally crossed the southern U.S. border this year. – Mary Tuma

When President Barack Obama visited Austin Thursday, he set off yet another social media frenzy. At Franklin Barbecue, the President of the United States of America encountered Daniel Rugg Webb – comedian, artist, musician, and part-time Franklin employee – and, of course, sparks flew.

"It was just a lucky day to be the register girl," says Webb. As the president approached, Webb threw his hand down and slapped the counter dramatically. "Equal rights for gay people!"

"Are you gay?" the president asked.

"That's my favorite part because it was cool to get a joke in. In all the photos [all over the Internet], I look like a dead fish, but it was cool. I do stand-up, so it was nice to have some interaction based on, hopefully, something funny."

Though the president received a warm round of applause at Franklin, the photo op wasn't all fist bumps and sweet Texas barbecue. Amy Rattananinad, former Long­horn and Occupy UT organizer, handed the president a sign that read, "Stop Deportations."

"The girl, Amy, who handed him the note, and he really kind of got into it," Webb recounts. "They had kind of a real conversation, direct. You don't just get face time with world leaders. I was impressed that he had a serious conversation with somebody in the middle of what would be a photo op."

The president also caught some flack for cutting the famously long line at Franklin. Webb side-eyes that sentiment, "Logistically, that's a really lazy complaint. I don't think you can safely have a world leader hanging around in a line." Obama reportedly dropped $300 for himself and other patrons.– Nina Hernandez 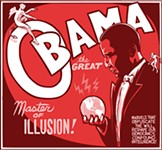 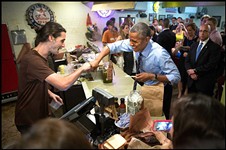