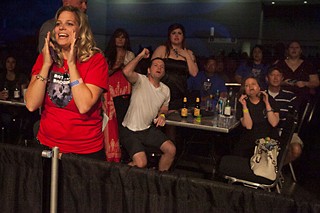 › City Council's regular meetings resume Aug. 7. Meanwhile, mayoral and 10-1 candidates are at the official starting gate: Formal filing for office begins Monday, July 21, and the first campaign finance reports (covering the period through June 30) were due Tuesday, July 15. (AISD board of trustees candidates can file beginning July 18.) See "The Road to 10-1," July 18.

› In the governor race, Greg Abbott and Wendy Davis tied in the latest round of fundraising, with $11 million in donations each. But Abbott still has a bigger war chest, with $36 million cash on hand compared to $13 million for Davis.

› The 5th Circuit Court of Appeals ruled Tuesday that UT-Austin can continue to use racial or ethnic background as a factor in making admissions decisions, in the lawsuit filed by a former applicant. "University education is more the shaping of lives than the filling of heads with facts – the classic assertion of the humanities," wrote Judge Patrick Higginbotham.

› Death-row inmate Rodney Reed, convicted in a 1996 Bastrop County murder, received a Jan. 14 execution date, but the state agreed to DNA-test a limited number of additional items associated with the slaying of Stacy Stites.

› Summer in Austin has officially begun: On Sun­day, the local temperature broke 100 degrees for the first time.

› Speaker Joe Straus has appointed three Repub­licans – Reps. Drew Darby of San Angelo, John Otto of Dayton, and John Zerwas of Simonton – to the powerful Legislative Budget Board. All three have been rumored as top contenders to become the next chair of the House Appropri­a­tions committee.

› Texas cannot ban the sale of Confederate flag license plates in Texas, found the 5th Circuit Court of Appeals earlier this week. The court ruled the Department of Motor Vehicles engaged in "viewpoint discrimination" when it refused to offer the plates, and violated the First Amend­ment rights of the local Sons of Confederate Veterans group when they rejected the plate application. The ruling overturns a 2013 Austin-based federal court decision. The Texas AG's office is expected to appeal.