Then There's This: Reimagining the South Waterfront 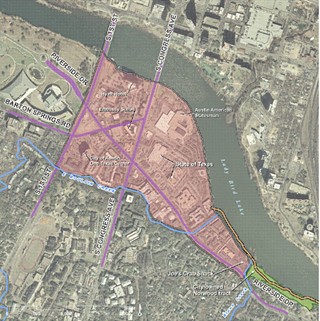 The South Central Waterfront planning area (lightly shaded) includes 97 acres bounded by South First Street on the west, Blunn Creek to the east, Lady Bird Lake on the north, and East Riverside Drive and East Bouldin Creek on the south. (Photo courtesy of City of Austin)

It's pretty clear that not much thought went into the jumble of old buildings and parking lots that spill out from the south shore of Lady Bird Lake to Riverside Drive. We're talking about the area between South First and east of Congress, home of Hooters, the Hyatt, the iconic Threadgill's, some unremarkable office buildings, and the big box known as the Austin American-Statesman.

While those landmarks are comfortably familiar to those of us who travel these streets nearly every day, the cranes in the sky on four properties in this area offer the first signal that big changes are in store for this time-forgotten corner of town.

Enter the South Central Waterfront Init­i­ative, the city's attempt to get out ahead of the transformation to make sure that some sense of planning and forethought goes into what's expected to be widespread redevelopment across 97 acres. In other words, we don't want to see a repeat of the disconnect that exists today.

Late last month, city planner Alan Holt brought the City Council Comprehensive Planning and Transportation Committee up to speed on a draft vision framework derived from a series of community "walkabouts" and "talkabouts" involving property owners, neighborhood residents, and community leaders. With a little financing from grants, the city was able to enlist planning and redevelopment experts John Fregonese and Abe Farkas, both of Portland, Ore., to help guide the framework for redeveloping the waterfront.

Holt began his presentation with some fun facts: Thirty-three Downtown blocks could fit into the boundaries of the South Central Waterfront, which, to be precise, includes South First Street on the west, Blunn Creek to the east, Lady Bird Lake on the north, and East Riverside Drive and East Bouldin Creek on the south. The area is comprised of about 75% impervious cover, with half of that amount swallowed up by paved surfaces.

With about 600 participants weighing in on the waterfront's future during a set of planning workshops, their wish list matches what most every other resident wants: open space and open access to the lakeshore, people-friendly designs, high-quality architecture and design (yes, please), affordable housing, "green approaches" to water quality, a green network throughout the district, and multiple transportation options. On the transportation matters, voters will have a say in November on a rail proposal that could include a rail stop on the waterfront, just east of the Statesman, whose owners, Cox Enterprises, lay claim to 18 acres of some of the most sought-after lakefront real estate in Austin.

"We're looking at creating a long-term vision, and so we're trying to imagine this area 20 years out," Holt later told me by phone. While it's hard to predict decades into the future, some economic analyses conducted last year through a HUD-sponsored program – the Sustainable Places Project – revealed that if market forces continue the current trend, most of the privately owned properties in this area will likely be redeveloped in the next 15 to 20 years, which would translate to an investment value of more than $1.2 billion. All the more reason to craft a plan that would benefit future generations.

"Other than One Texas Center [the city-owned office building at South First Street and Barton Springs Road], the city doesn't own anything down here," Holt said of the planning district. "So we're working with 31 different private property owners in trying to come up with a plan that is flexible, so that the city is not in a position to dictate when someone should or should not redevelop – that's a free-market decision. Because most of these property owners are going to decide at some point that they're going to redevelop, we're trying to get out ahead of that with a plan that will have broad buy-in from both property owners and residents ... to plan for an orderly redevelopment."

One of the big questions still to be decided is how to finance the development and implementation of the plan. That could be a decision for the next City Council.