Sheriff Hamilton continues to back S-Comm, even as sheriffs across the country reject it 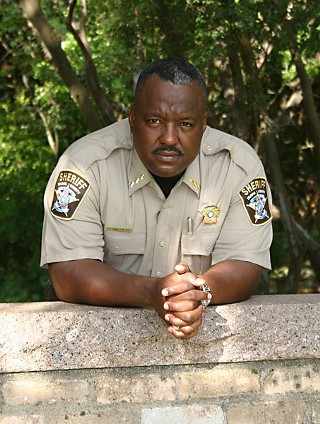 June's City Council vote repudiating Travis County's participation in "Secure Communities" – designed to help federal immigration officials deport undocumented immigrants – was less notable for its official action than for Sheriff Greg Hamilton's response, showcasing his unwavering support for the program. On June 26, Council members unanimously passed a resolution formally opposing Travis County's participation in the S-Comm program, through which federal immigration officials identify jail inmates for deportation. Nearly 5,000 people have been deported as part of the program since its 2009 implementation.

In officially opposing the program, Austin joins a growing list of municipalities rejecting S-Comm, either for fear of lawsuits or to avoid alienating minority communities – on Monday, Los Angeles joined the list of cities opting out of S-Comm. Yet Council's action seemed only to further embolden Hamilton – the person tasked with implementing S-Comm and also its staunchest official defender.

The morning following the Council vote, Hamilton reached out directly to media likely to accept uncritically his version of the situation. He armed himself with figures from a booking list of inmates currently held in the jail on immigration detainers – a list that includes only those inmates arrested on serious felony charges.

But the list of those currently incarcerated doesn't in fact indicate they were ensnared by S-Comm efforts – only that they were subsequently identified as undocumented – with a "INS detainer" notation by each entry the only indication of a prisoner's immigration status. INS stands for the now-defunct Immigration and Naturalization Service, supplanted in 2003 as part of a post-9/11 shakeup of agencies now under the Office of Homeland Security. Moreover, Hamilton's list contains no names, or countries of origin of any inmates, but rather is a list of offenses – making it harder to determine if the list reflects multiple charges per inmate, and making it appear that there are more felons among undocumented immigrants than in fact is accurate.

No matter. Hamilton's favored media outlets made it certain that his mysterious list had the desired dramatic effect. KVUE-TV News took the bait, appropriating the booking sheet for its own breathless reporting, unquestioning and given a sheen of exclusivity. "Sheriff Greg Hamilton provided KVUE News with a list of the 236 inmates in jail Friday on INS detainers. Their offenses range from DWI and possession of marijuana, to sexual assault of a child and murder. Some are repeat offenders."

Credulous reporters weren't alone. State Rep. Tony Dale, R-Cedar Park, also got into the act last week, quickly sending an open letter to Council members and devising a flier, campaign fodder for November. "The 36-page list Sheriff Hamilton released is an eye-opener for anyone paying attention," Dale wrote. "Its pages are littered with murderers, rapists, arsonists, and a shocking number of sexual offenses against children. Although I suspect none of these criminals testified at your [City Council's] Thursday meeting, I am certain that your passage of this resolution has their full support."

However, by his own admission, Hamilton has no idea how many people have been arrested as a result of S-Comm. He acknowledged as much in a conversation with KLBJ-AM the morning after the Council vote, when he called into the Austin's Morn­ing News program to chat with its hosts.

One of those hosts, Mark Caesar, asked the question directly: "Do you know how many are in your jail as of this moment, sheriff, that are in this situation?"

Hamilton: "What, as far as a detainer?"

It's that list again – from which various figures are extrapolated and manipulated for media dissemination, despite its lack of context and transparency, and its questionable methodology. The Austin Immigrant Rights Coalition has crunched the numbers of foreigners detained locally – their data show that 77% of those deported from Travis County were merely accused of misdemeanors.

Hamilton's list makes no such distinctions: Only hardened felons are represented; no inmates booked on misdemeanors are reflected at all. In this parallel universe, the S-Comm initiative somehow magically captures only the really bad guys and targets them for deportation.

On KLBJ, Hamilton inadvertently offered his most ample explanation to date, offering caveats on how to interpret his data: "It's not numbered," he told Caesar. "And I want you to know on this list every 'charge literal' that you see ... that's one person with several different charges. One of the things we're figuring out a way to grab this and put it out on the website so that people can see what the individual charges are, and that should be put out probably Monday or Tuesday."

As of Wednesday morning, a revamped list better reflecting a jail population of undocumented S-Comm detainees had not been posted. But even absent a list adhering to acceptable methodology, the nameless roll call of supposed undocumented felons Ham­il­ton has been so eager to share has had its intended effect – misleading the public while fanning its basest fears and most xenophobic visions.