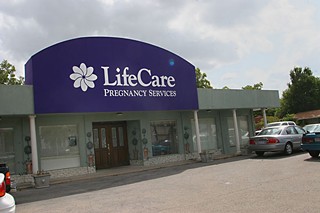 In late June, a federal judge struck down an Austin ordinance that would require unlicensed "Crisis Pregnancy Centers" – religious facilities that discourage abortion – to post signage indicating that they do not provide medical services. "It's unfortunate, but we are compelled to respect and comply with Judge [Lee] Yeakel's ruling," City Council Member and ordinance co-sponsor Mike Martinez told the Chronicle. "What we were trying to do was to simply provide as much information as possible to women seeking reproductive health care services."

Most CPCs provide only a limited range of quasi-health care services, like pregnancy testing, nondiagnostic sonogram scans, and adoption counseling. They are typically affiliated with anti-abortion religious groups and staffed by nonmedical volunteers, and unlike comprehensive health centers, their actual mission is not health care, but to discourage women from seeking abortions. They've also engaged in advertising to pregnant women in the guise of "abortion services" – misinformation that prompted Google to remove some online CPC ads earlier this year.

The pattern of misinformation led city officials to propose accurate signage informing prospective patients that the CPCs are not, in fact, health care clinics. Austin's 2010 ordinance was described as a "truth-in-advertising" measure – intended to ensure that women entering CPCs would receive factual consumer information. Aus­tin was the second city to enact such a measure, after Baltimore. Failure to post the signage would be a Class C misdemeanor, punishable by fine of up to $450.

In 2011, local CPCs and their allies filed suit against the city (see "Crisis Pregnancy Centers Take City to Court," Oct. 14, 2011). Citing infringements on free speech and religious liberty, the Roman Catholic Diocese of Austin, Catholic Charities of Central Texas, Austin LifeCare, the Austin Pregnancy Resource Center, and South Austin Pregnancy Resource Center said the ordinance would "substantially burden their religious ministries," and that it "unconstitutionally seeks to suppress unpopular ideas and information relating to pregnancy, and to manipulate the public debate by attempting to dissuade women from hearing pregnancy information from a religious perspective."

In early 2012, City Council passed a revised ordinance that removed any mention of abortion and birth control, requiring the sign to simply state whether the center provides medical services, if those services are provided under direction and supervision of a licensed health care provider, and whether the center is licensed by a state or federal regulatory agency. It wasn't the ideal resolution, Martinez said, but was considered the best shot at minimizing legal risk.

After three years, on June 23 U.S. District Judge Yeakel finally ruled, in a 15-page opinion, that the ordinance is "unconstitutionally vague" and may violate the plaintiffs' guarantee of due process. The rule lacks "the precision and guidance necessary to ensure that those enforcing the law on behalf of the city do not act in an arbitrary or discriminatory manner," he wrote.

Jeff Mateer, general counsel for the Plano-based Liberty Institute, applauded his win in a press release, saying his clients' rights to free speech and religious exercise and expression have been "upheld." But in fact, Yeakel's ruling doesn't address the free speech and religious freedom complaints; the decision rests only on vagueness and due process, perhaps suggesting a way forward for a revised ordinance.

For reproductive rights activists, the ruling represents another dangerous step in misleading women seeking health care. The track record of CPC deception is considerable. For instance, a 2009 investigation by NARAL Pro-Choice Texas found that CPCs dispense medically inaccurate information, such as: erroneously linking abortion and breast cancer (long discredited by the National Cancer Institute among other medical groups); promoting fictional "post-abortion stress syndrome" (again, not recognized by the American Psychological Association); and propagating the misinformation that condoms are not effective in stopping the spread of STDs. And when discussing abortion, all CPCs investigated evoked a woman's relationship with God, NARAL reported; one of the CPCs in the Austin suit has been shown to mix religious and educational materials. A 2006 congressional investigation found that the majority of CPCs reviewed delivered "false or misleading information about the health risks of an abortion." Additionally, the mostly faith-based CPCs are not regulated by the state health agencies – nail salons and food trailers must be licensed, but not these anti-choice centers.

"People going to these centers deserve to know that the person performing a sonogram or other medical procedure is not a licensed health care professional," said Heather Busby, NARAL Texas' executive director, in a statement. "Crisis pregnancy centers are fighting this ordinance because their true purpose is to scare women out of making their own reproductive choices – not about providing comprehensive services to assist pregnant people."

Moreover, CPCs continue to collect millions in taxpayer dollars. Established by the Legislature in 2005, the Alternatives to Abortion Program (the state's CPC umbrella network) began by diverting $5 million over the biennium away from federal assistance for low-income families (and later, from family planning funding) and into the statewide program for "pregnancy support services that promote childbirth." The 2013 Legislature allotted $10.3 million over the next two years, an increase of $2 million over the previous biennium – while steadily slashing family planning dollars and forcing actual clinics to close their doors.

As Busby told the Chronicle, the recent closure of dozens of preventative care clinics has increased the likelihood women will now gravitate toward CPCs. "As clinics are forced to close, there's this vacuum that CPCs try to fill because they're trying to dissuade people from getting abortions," Busby said. "The sad fact is they're not providing much in the way of practical support, and they're not going to refer them to a legitimate clinic. Their goal is to get people in the door, intimidate them, and take choice away from them."

Similar ordinances elsewhere – including Baltimore, New York City, and Montgomery County, Md. – are also mired in litigation. Martinez said an Austin appeal is "certainly a possibility." The city's legal department is "evaluating options," which could include again amending the ordinance in light of Yeakel's ruling.

Martinez called the ruling a disheartening sign of the times. "As we saw with the Supreme Court [Hobby Lobby] ruling and the fight that started a year ago with Senator Wendy Davis, it's clear that women's issues and reproductive health care are under attack on many fronts – and this is simply another blow in the attack," he says. "So we must remain vigilant and continue to fight."