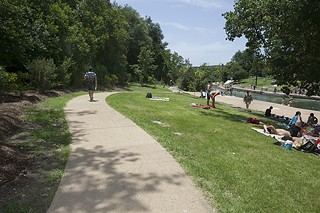 Improvements to Barton Springs Pool's south side, including this paved walkway to the pool, made their official debut Wednesday in a public celebration. For more images see austinchronicle.com/photos. (Photo by Jana Birchum)

› City Council doesn't meet formally again until Aug. 7 (with a budget work session a week earlier, July 31) although expect to bump into mayoral candidates – not to mention 10-1 wannabes – all over town in the next few weeks.

› Months before the election, 10-1 is already having destructive effects on City Hall. On Wednes­day, demolition began on the current dais to make room for the new Council seats. During the remodeling, Council meetings will be held at the Travis County Commissioners Court.

› 10-1 candidates have until July 15 to file campaign fundraising reports, but mayoral candidate Steve Adler is already crowing about his haul. His campaign said they raised $363,000 in seven weeks from 1,400 individual donors – more than the totals Mayor Lee Leffingwell raised in each of his 2009 and 2012 runs.

› July is Parks Month in Austin, under the theme of "Out Is In" – ponder that existential conundrum over your brats and beer, or while walking, running, or biking the new Boardwalk Trail.

› The court date for Rashad Owens was reset during a hearing Tuesday morning. Owens, accused of killing four people in the SXSW hit-and-run, did not make an appearance in Judge Cliff Brown's 147th Criminal District Court that day. His next hearing date is set for Sept. 2.

› Sharp rhetoric and high feelings on the Forty Acres. After UT System Chancellor Francisco Cigarroa gave an ultimatum to resign or be dismissed to UT-Austin President Bill Powers, Powers has negotiated a deal to stay on the job through June 2015. See "Point Austin."

› President Barack Obama visited Austin this week for a quick fundraising trip, a speech on the economy at the Paramount, and just maybe a sit-down with Gov. Rick Perry for a chat on the border immigration crisis.

› The Chief Disciplinary Counsel of the State Bar of Texas has made a finding of "just cause" to review allegations of prosecutorial misconduct against former Burleson County District Attorney Charles Sebesta Jr. In 1994, Sebesta prosecuted Anthony Graves for murder – 18 years later, the conviction was overturned with Graves exonerated, with Sebesta accused of misconduct in the case. See "Graves Prosecutor Under Misconduct Review."

› Attorney General Greg Abbott's connections to the Koch brothers have come under national scrutiny after he issued an opinion saying that government entities are not obligated to release information about what dangerous chemicals companies are storing. In completely unrelated news, the Kochs and their chemical companies have given $75,000 to Abbott's gubernatorial campaign.

› Not all national-level conservatives are so eager to come to Texas: The Republican National Convention announced this week it has chosen Cleveland over Dallas for its 2016 gathering.