An 'Open' Search for AISD Chief 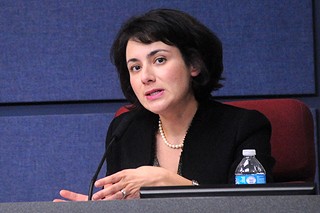 Wanted: a new permanent superintendent for the Austin Independent School District. With interim Super­intendent Paul Cruz filling in since Meria Carstarphen resigned in April, Board President Vince Torres said the trustees are "well on the way" to finding a new permanent district CEO. However, with the final decision not due for months, he has laid out a timetable that will allow stakeholders and residents major input at both the beginning and the end of the hiring process. Torres said, "The most important thing I want to convey to the community is that we want you to be involved."

The challenge for the board was to balance out the need to get a permanent leader as soon as possible with the necessity to get as much community input as possible. Board Vice President Gina Hinojosa said, "Speaking for myself, I rely so much on expertise and information I get in the community, and I don't see this being any different."

The initial step requires developing a superintendent profile of ideal traits and experience, and that's the first stage at which the community can get involved. Between now and August, the district will use a combination of public meetings, online surveys, and conversations with over 200 stakeholder groups and entities to come up with an idea for what the community wants from its next boss. During the last superintendent search, back in 2009, there was a profile-feedback process which Torres said was "still thoughtful," but not as "research-based as this one."

After that, search firm Ray and Associates will take applications and start headhunting candidates, and winnowing that long list. That's when the second round of public consultation starts, when the board will introduce a short list of two to four finalists to the community. Hinojosa said, "We're still working on how we can roll these finalists out into the community, so everyone gets a chance to evaluate our final decision."

Publishing the finalist slate is a new step for Austin, and is uncommon in superintendent searches. The argument against a public short list is that quality candidates won't want their current employers knowing that they're looking elsewhere. That's why the district will only release that final short list, as there is no point publicizing the names of failed applicants, or candidates who were headhunted but were not interested. "There are some folks who will not apply under the process we're using" said Torres, "But it's important for us for the community that they know who we're going to be selecting from."

It's a far cry from 2009, when a closed process (one riddled with accusations of racial preferences and media leaks) resulted in the sole finalist being presented as a fait accompli to the general community. That sat poorly with many Austinites, who felt neither the board nor the community had ample time and opportunity for due diligence before making the hire. Education Austin President Ken Zarifis called the 2014 process "worlds away" from that. "It almost leaves you speechless," he said. "It's obvious that they have responded to the community's demands that this be an open process, and not a backdoor decision."

The new timeline also answers a key question: Who will actually select the winning candidate? Under this process, it will be the current board of trustees that presents the finalist short list. However, with five of nine seats on the ballot in November, it will be a new-look board that actually makes the final hire. That was a dominating issue in the early trustee discussions, with division over whether the current board should make the decision, or whether it should be left to the next board, since they would be the ones working with the new superintendent.

Hinojosa had originally advocated for a quicker process, potentially even hiring the successful applicant by the end of the summer: That way, she argued, it would take the search off the table as a dominating factor in the November elections. But she and Torres agreed that the process needed to be built around finding the best candidate, rather than be driven by the election calendar. "This board has the responsibility to find a new superintendent," she said, "but I think having a new board ratify that work can only be good."

Zarifis backed this division of labor, and said, "The right decisions can be made by the current board for AISD in the coming months, and then I trust in the incoming board to finish the job."

However, this is a flexible timeline, designed to absorb unexpected scenarios. Ideally, Torres said, the board would like to have a new superintendent in place for the start of the spring semester, before the next legislative session begins on Jan. 13. That could be vital, since the pending school finance lawsuits, and the aftermath of the new STAAR tests, mean education is guaranteed to be a hot-button topic again in 2015. Yet, in a tacit nod of approval for interim Superintendent Paul Cruz's tenure, Torres did not rule out leaving him in charge if the board's preferred candidate could not start immediately, and said the new hire might not start until the school year ends in May.

Yet there is also flexibility to move the hiring up. After the matter was discussed at a recent board retreat, Hinojosa said she was left with the understanding that the timeline has been built with "a cushion" for extra consultation. Yet if there are clear front-runners early in the process, she said, "We have reserved the ability to move forward."

May 28: Board hires Ray and Associates as search firm.

On July 15, AISD and search firm Ray and Associates will launch three days of community meetings and open public forums at campuses around the district in an effort to get community input on what residents want from the next superintendent.

In addition, there will be afternoon forums from noon-1:30pm on all three days at Baker Center, 3908 Avenue B.

District residents can also give their opinion (in English, Spanish, or Viet­nam­ese) via an online sur­vey: www.austinisd.org/superintendent-search.