Votes Pending: The Case for Connect 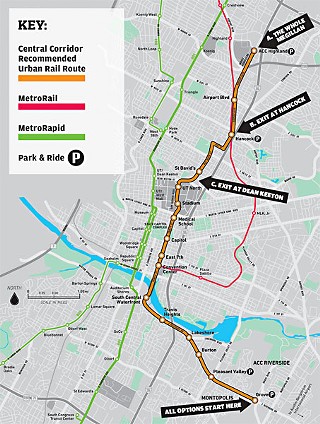 On Monday, June 23, the Capital Metro Board of Directors voted to endorse the proposed urban rail line connecting the Highland redevelopment to East Riverside, adding language in support of future expansion to Austin-Bergstrom Inter­na­tion­al Air­port. Today, (Thursday, June 26), City Coun­cil is expected to vote on the proposed rail line as well as area road projects, recommended to be in a 60/40 proportion, rail spending to road spending. Later this summer, possibly Aug. 7, Council will then vote whether or not to put the proposal to voters in a November bond election. The official rationale is that, even at a cost approaching $1 billion over the next decade, both rail and road projects are needed to address traffic congestion; but at the same time, it's also true that by packaging the rail proposal with road improvements, the plan could garner broader voter support.

Months before the tentative vote in November, the fight over rail is still in the early rounds. However, thus far it's been a one-sided argument; while the opposition has been able to freely throw punches, public agencies like Capital Metro, Project Con­nect planners, and city staff have been forbidden by state law from explicitly promoting bond proposals, requiring an "education only, no advocacy" position.

Mayor Lee Leffingwell, who, as a policymaker, is allowed to promote the project, has said that the push for support will kick off more formally in August. As we've previously reported ("November Calling: PACs Form on Rail Vote," April 8), some organizations – e.g., Austin Gets Around and the political action committee Let's Go Austin – have formed that will likely support the proposal, and the Down­town Austin Alliance and Down­town Austin Neighborhood Assoc­i­ation have already done so, with the Chamber of Com­merce yet to weigh in.

While Leffingwell acknowledged to the Chronicle that the current political context – including a spreading backlash against property taxes – is "a little scary," the Mayor is still "very confident" that the plan can win over the public on the November ballot. Capital Metro board member John Lang­more, who served on the Central Corridor Advisory Group, says he's also very confident in the process and the proposal, and intends on being an "active activist" as the ballot approaches, although it won't be "a slam dunk." Langmore acknowledged the rail opposition, but said that supporters of the plan should begin to do a better job emphasizing the advantages of the proposal.

The Project Connect team and the mayor have repeatedly stressed the importance of understanding the current proposal within the context of a long-term and much larger transit project. Describing the project as part of a public transit system, Capital Metro Communications Specialist John Julitz says the plan "will bring new riders to the entire system, and at the same time provide additional choices for people looking for options."

While shorter, less expensive plans could be an option, Leffingwell and the Project Connect team say they would like to see the full recommended Locally Preferred Alter­nat­ive – from Highland on the north to Riverside/Grove on the south – go to the ballot in November. Leffingwell thinks that shortening the rail plan would lose more support than it would gain, and Keahey has noted that the FTA, on which they're depending for half of the project's funding, would be more likely to support a fully conceived, shovel-ready plan.

The full 9.5-mile LPA would travel through 16 stations from Riverside/Grove on East Riverside, over a proposed new bridge over Lady Bird Lake, Trinity Street in Downtown, along San Jacinto through the UT-Austin campus, up Red River to the Hancock Center, through a tunnel at Han­cock in order to cross the Red Line, before running up Airport Boulevard to the new Austin Community College High­land campus. Project Connect has estimated that the completed LPA would serve 16,000 to 20,000 daily riders by 2030, adding nearly 10,000 new transit riders to the system.

The project won't be cheap, running at an estimated price tag of $1.38 billion, as well as $22 million annually for operations and maintenance. While the FTA will be asked to cover half of the costs, the proposal would mean higher property taxes, adding an estimated five cents or $11 per month to the annual bill on a $200,000 home – not counting any additional bonds dedicated to road construction.

Proponents argue that it would be a good investment for Austinites, even if they personally won't use the service. Most Austinites recognize the city's traffic crisis, said Leffingwell, and that if nothing is done, it will only get worse. For only $10 or $15 more a month in taxes, voters could get a system that could offer additional transportation options and alleviate some of the city's congestion even for those that won't use the system. And if voters reject the proposal, warns Langmore, the city will be stuck with "the current trend projected indefinitely into the future – growing congestion and declining quality of life."

Langmore also said that his questions and concerns have been addressed through the planning process over the last two years, and believes some opponents would reach the same conclusion with the same information. In fact, CCAG member and former planning commissioner Dave Sullivan says he's optimistic he'll be able to persuade some of the vocal opponents of the Highland corridor plan – who argue that Guadalupe/Lamar would be preferable – because the team's research determined that future growth projections to support rail are stronger in the Highland corridor than in the current Guadalupe/Lamar corridor.

In the latest wrinkle, Council Member (and mayoral candidate) Mike Martinez has suggested that a line running from Hancock all the way to Airport might make better sense and be more promotable to the voters. And some Guadalupe/Lamar supporters continue to oppose the project if the northern corridor isn't redirected. Yet if at this point, the CapMetro board or Council decides to send the project back to the drawing board for reworking, that likely ruins a November timeline.

Leffingwell told the Chronicle that the prep work has been completed for this year's decisions, and he recalled the narrowly defeated 2000 light rail vote. He believes that if this plan doesn't reach the November ballot, another opportunity may not come around for another 14 years: "There is no Plan B."