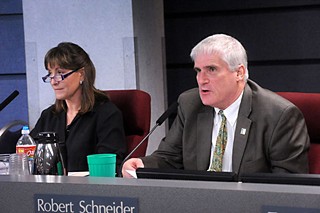 Laborers working on Austin Independent School District construction projects should see a boost in their pay packets. On June 16, district trustees voted to adopt a new standard for calculating contractor wage rate – the federal Davis-Bacon scale – for works on its bond projects, and instructed staff to study what a real living wage in Austin is.

However, the measure did not have the full backing of the board. It was originally on the consent agenda, but was removed and only passed after a four-hour debate. Even then, only five of the nine trustees – board secretary Jayme Mathias, Ann Teich, Amber Elenz, Tamala Barksdale, and Gina Hino­josa – voted for the change, while president Vince Torres, Cheryl Bradley, Lori Moya, and Robert Schneider opposed it.

Yet the change comes with the backing of a large number of labor organizations, including Education Austin and the International Union of Painters and Allied Trades, and advocacy groups like the Workers Defense Pro­ject. Stephanie Gharakhanian, research and policy director for the WDP, said she heard "a real commitment" from the majority of the board to ensure a living wage for contractor employees.

The new scale sets pay floors for staff on projects funded by AISD bonds. It takes its name from the 1931 Davis-Bacon Act, which set minimum wages for contractors on federal projects. It applies to both construction projects and concessions on federal lands. Both Travis County and the city of Austin use the federal governments localized, but AISD has its own pay scales.

Currently, that scale is in general alignment with the latest Davis-Bacon rates. In a comparison of total compensation including health insurance versus the current Davis-Bacon rates including fringe benefits, AISD projects pay 97.5% of the prevailing wage. But dig a little deeper, and the situation is less sunny for certain categories. District electricians, plumbers, and finish carpenters receive only two-thirds of the Davis-Bacon numbers, while elevator/escalator installers are paid less than half the going rate.

But Bradley explained that her "no" vote was for other workers who could see a drop in wages, as some categories – such as cement mixers and air-conditioning mechanics – are paid above the Davis-Bacon minimum. Moreover, Bradley argued that this does nothing to protect unskilled workers from exploitation by unscrupulous contractors.

Gharakhanian said she did not share Brad­ley's concern, "because [Davis-Bacon] sets floors, and the market accounts for the difference." Moreover, she hopes that the staff's minimum wage study will arrive earlier than the February 2015 deadline set by the board. Last week, the Austin City Council instructed City Manager Marc Ott to establish a new local living wage for city employees (the first such revision since 2008), and Gharakhanian hopes AISD can either hit a similar timeline or work with the city's numbers.

Contractor pay has become a political hot topic nationally. With Congress in seeming constant gridlock over minimum wages, in February President Barack Obama signed Executive Order 13658, establishing a pay floor of $10.10 per hour for federal contractors. The Department of Labor is now working to implement the proposed rule change by Jan. 1, 2015.