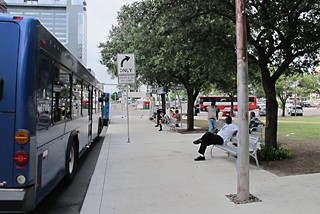 The southbound stop at Fourth and Guadalupe (Photos by Richard Whittaker)

If you find yourself on Congress Avenue, look around. Something's missing. For the first time in decades, Capital Metro has taken all its buses off the city's major Downtown thoroughfare, and switched them over to Guadalupe and Lavaca streets.

The idea first arose in 2005, when City Council started the Downtown Austin Plan, and was formalized in the 2008 Draft Transportation Framework Plan. However, that reflected a very different Downtown plan, which proposed using Congress and San Jacinto for rail, Guadalupe and Lavaca for buses, and turning the 'Dillo trolley car service into a circulator to connect the two. Skip to 2014, and there's no rail on Congress, the 'Dillos were sold off in 2009 – but the buses have still been moved.

When Cap Metro released its ServicePlan2020 vision document in 2010, the agency recommended moving all Downtown routes, at the time split between Brazos, Colorado, and Congress, to Guadalupe-Lavaca. Todd Hemingson, Cap Metro's vice president of strategic planning and development, said, "That analysis led to the conclusion that Congress Avenue was the slowest part of the transit system." Over­crowded and accident-prone, Congress had become a bottleneck at every junction, but speed was only half of the 2010 argument. Cap Metro is barred from building actual shelters on Congress, and nearby stops at Brazos and Colorado streets were on narrow sidewalks, often blocking entrances, and without shade. The service plan recommended better stops, and even suggested that "provisions for restrooms should be considered."

Hemingson sighs when that wish list is mentioned. He knows that, by comparison to many other cities, Austin sorely lacks public amenities, so now with the new corridor, they can at least build actual shelters. But there's a trade-off. While the old stops were hardly salubrious, at least most had either tree- or building-cover for shade – something lacking from most stops on both Guadalupe and Lavaca. The new stops are of varying quality: At Fourth and Lavaca, there are multiple benches, leaning posts, structure shade, and tree cover. But at Seventh and Guadalupe, there's no respite from the beating afternoon sun or cover from the storms. As for using metal benches in Austin's summer weather, the less said, the better.

Still, Hemingson called Downtown "the least-worst pedestrian environment in Aus­tin, but there's been significant improvements with the Great Streets program." Moreover, his agency has been working with disability advocates ADAPT of Texas for the last six months. He said, "We've improved 70 different corners to make them more accessible, and [have] completed sidewalks." His final argument for the move is that all of Cap Metro's Downtown routes now use the same stops – Northbound on Lavaca, Southbound on Guadalupe – and interlock with the new 801 MetroRapid Bus Rapid Transit system. Ridership on that line has been light thus far (see chart), but Hemingson notes, "We really had the 801 operating independently through the highest point of transfers in the network." With more riders at the same stops, he foresees a boost in passenger numbers. "Like any transit system, the whole is more than the sum of the parts."

Molly Alexander, associate director of the Downtown Austin Alliance, agrees that having all the bus routes mesh is essential. She said, "When you go to a city or you're a new rider, having all your alternatives in a central location makes it a lot easier." Moreover, relocation makes the buses more appealing to the increasing number of workers west of Congress, while still being a walkable distance for old riders. 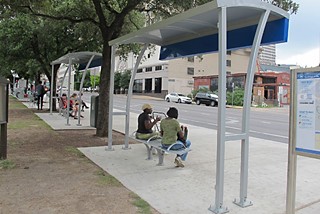 Similarly, Downtown Austin Neigh­bor­hood Association President Pamela Power sees the change as improving the look and feel of Downtown. She said, "I know there is a great vision for Congress Avenue ... making it a place where residents, employees, and visitors spend more time engaging with one another, in activities along the street. I think removing the buses makes that vision much easier to realize."

Both groups met with Cap Metro during drafting of the 2020 plan, but the Alliance also held its own consultation process with local stakeholders. They came to the same conclusion: Having the buses on Con­gress was not optimal, and the street was losing opportunities. Moreover, Alexander sees the shift as a shot in the arm for the relative dead zone west of Congress between 11th and Seventh. Unless you're going to a specific location – like the Travis County Courthouse or Faulk Central Library – you're very unlikely to find yourself there. Not so with the new stops. "Land use and transportation are directly linked to one another," Alexander said. "How many people know Wooldridge Square exists? But you'll have new eyes on it." She also sees potential for new businesses. While some firms on Congress historically regarded large numbers of riders waiting outside their door as a nuisance, others saw them as a potential customer base, she said: "If I was a coffee vendor or convenience vendor, I'd see an opportunity in a heartbeat."

Former Urban Transportation Commis­sion­er, AURA founding member, and constant Cap Metro critic Mike Dahmus is less convinced of the merits of the change. "In an ideal world, it would be a good thing," he said. He cites the work of transit planning consultant Jarrett Walker, who argues that the fewer turns a bus makes, the better, "so if you have the opportunity to straighten things out, you do that." But he says Cap Metro did not take the needs of current riders into account, and made the trip to Congress tougher. "When you talk to the actual transit users, people that use the bus all the time because they can't drive, they hate it," he said. "Walking three to four blocks doesn't sound like a big deal until you have to do it every day, twice a day." He's also unconvinced by Alexander's hopes for major redevelopment along the Guadalupe-Lavaca corridor "because so much of the land is off-limits. Too many state buildings, too many county buildings, too many things that are on [Capitol] view corridors."

The biggest shift is arguably in the number of stops Downtown for north-south services: from 22 a decade ago, to six now. Prior to 2008, riders on major arterial routes going down Congress had their choice of 11 stops on each side of the road. The positive was that riders could stop anywhere; the downside, as ServicePlan2020 noted, was "a wall of buses slowly moving down the street." Then the Texas State Preservation Board ordered the closure of the heavily used stop on 11th, in front of the Capitol. (At the time, and to the bemusement of many, the board cited security concerns; however, there was widespread belief that the move was just to clear the view from the Governor's Mansion.)

Then in 2010, Cap Metro closed four of the most heavily used stops on Congress: Sixth and Seventh Northbound, and Sev­enth and Eighth Southbound. The argument then was traffic safety, as Sixth and Sev­enth were responsible for 122 of the 218 vehicle collisions on Congress that year (see "Putting the Brakes on Congress Bus Stops," Nov. 12, 2010). Now the argument is, as it has been all along, that reducing and relocating stops will cut journey time.

The test case for that argument will be the 801. It spearheaded the move to Guadalupe-Lavaca, using the corridor since its launch in January, so it has faced the greatest scrutiny. It, and the local buses that supplement it, is serving Austin's workhorse route, from Tech Ridge to South Park Meadows. A year ago, the 1L/1M were carrying an average of 13,600 passengers on a weekday, while the 101 Express route was handing around 3,200. Skip forward to 2014, and the 1L/1M have been replaced by the combined Route 1, and the 101 has been scrapped in favor of the new 801 MetroRapid. Hem­ing­son said ridership on the 801 "has had a significant spike" – up 81% from the 101's average usage a year ago (from 3,284 riders per day to 5,929).

So where have those new riders come from? Seemingly, from other buses on the same route. Ridership on the 1 is down 42% from the 1L/1M in spring 2013. Even adding in the new 275 Feeder, running from U.S. 183 to Tech Ridge, there's been an 11% drop in total ridership along the combined routes since last year. Hemingson argues that all changed services see an initial drop, and that numbers are already bouncing back. However, Dahmus believes that the change has simply driven riders away, and they're not coming back. Nor does he foresee passengers jumping from a local bus to the premium-priced 801 just because they're on the same road. He said, "If you bought a local fare, and then you go, 'Oh there's this shiny new bus,' and you try to get on, guess what happens?"

Hemingson is clearly frustrated that early 801 numbers have triggered open season on his office and the efficacy of the Guada­lupe-Lavaca switch. Moreover, it's just too early to call success or failure. The Federal Transit Administration, which provides 80% of the $48 million budget to establish BRT (see "FTA 'New Start' Funds MetroRap­id Buses," April 20, 2012), does not expect a before-and-after study on the route's impact until 2016. "They understand that new services take time," Hemingson said. "If after two years it's not meeting expectations, we'll have a serious discussion. But right now, it's meeting expectations." Ultimately, he said, "the broader response to the critics is: 'Well, be patient.'"