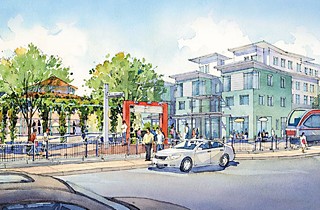 One of the most coveted stretches of property in East Austin is poised for redevelopment, with two finalists competing for the chance to reshape an old rail yard into a dynamic transit hub that blends into the surrounding neighborhood. 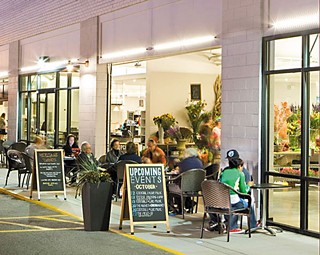 A full-service grocery store fronting I-35 proposed by Endeavor. (Photo courtesy of Endeavor)

Property owner Capital Metro is expected to announce the winning team June 23. The 11-acre tract runs from I-35 to Comal, between East Fourth and Fifth streets, and encompasses Plaza Saltillo and the Metro Red Line station, both of which will remain intact. The trick is to create more housing and businesses on the property, turning a relatively quiet area into a more vibrant plaza and station.

The Cap Metro board initially narrowed a wide field of competitors to four development teams, and heard presentations from each of them on April 15. Last month they selected the top two: Endeavor Real Estate Group and Saltillo Collaborative, which is led by Constructive Ventures' Perry Lorenz and Larry Warshaw. Both teams are led by Austin-based firms.

The Saltillo Collaborative group's proposal features 530 residential units (with 25% of the total square footage devoted to affordable housing), creative office space (anchored by what could be the new headquarters of SXSW Inc.), retail businesses, and a boutique hotel along I-35. The proposal includes a "Mercado Saltillo" public market, housed in an existing building that Lorenz owns across from the rail station.

The collaborative has tapped nonprofit housing developers Foundation Com­mun­ities and Guadalupe Neighborhood Devel­op­ment Corporation to lead the project's affordable housing efforts. The proposal carries the endorsements of the East Cesar Chavez Neighborhood Planning Team and the Workers Defense Project, based on the developer's commitment to pay all construction workers a living wage. 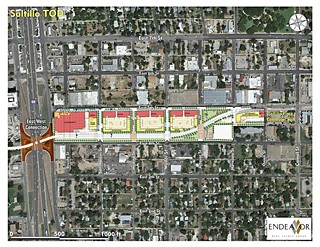 The Endeavor group's proposal includes a 60,000-square-foot full-service grocery store fronting I-35, which would be designed to establish a connection across the highway, team leaders said. The residential component would designate 25% for affordable housing, half of which would be reserved for seniors. Endeavor said it would create a live-work-play community, with repurposed historic buildings, retail businesses along East Fifth Street and residential units on East Fourth. The developer has also committed to paying construction workers a living wage.

In addition, the team's proposal features the dedication of a 1.7-acre public park, with playscapes and a dog park; another 1.8-acre site would be set aside for residents of the redevelopment, which would "lessen the impact" new residents would have on a public park space, Endeavor said.