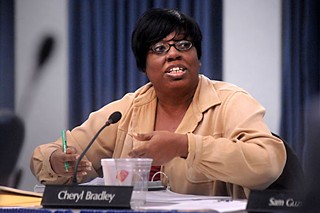 Five mayoral hopefuls. Fifty confirmed Council candidates (at least). The November Council elections are swarming with wannabe office holders. If only the Austin Inde­pendent School District were so lucky.

Five of the district's nine board seats will be on the ballot this year, and so far there is a dearth of candidates. In fact, the situation is almost exactly the same as it was in January. District 1 incumbent Cheryl Bradley made it clear to her fellow board members that she will not run again, while neither board President Vince Torres (District 4) nor At-Large Position 9 Trustee Tamala Barks­dale have made a definitive comment on their plans.

So far, there is only one race that looks close to competitive: In District 6, incumbent Lori Moya is likely to face longtime education activist and political consultant Paul Saldaña, in what could become a vitriolic contest. Moya is the daughter of former County Commissioner Richard Moya, while Saldaña is the acolyte and protégé of former Mayor Gus Garcia – two mainstays of the East Austin Hispanic old guard often nicknamed the "Brown Machine" – so this race could become a stone thrown into a traditionally peaceful pond. However, Moya is also on the fence about running again, stating that she's been too busy dealing with school district graduations to make a firm decision.

The only confirmed candidate is longtime District 7 incumbent Robert Schnei­der. Even though he had announced his intention to run again at the beginning of the year, there was continuing scuttlebutt and speculation that he had changed his mind. That seems to have been wishful thinking of potential opponents: Schneider recently confirmed that he does indeed plan to run, and said the only difference between this and prior election cycles is that he'll be getting some help running his campaign, rather than posting all the mailers and handing out all the stickers himself.

Who will fill Bradley's vacant seat? Edu­ca­tion Austin President Ken Zarifis predicted, "We will have at least one person run for District 1." However, that makes it the most important seat: Bradley has been the strongest voice on the board for the "education reform" platform of charters and single-sex schools. This could readily make this a battleground seat as contentious as the Moya-Saldaña race – if anyone indeed runs.

The scarcity of candidates concerns education advocates, but is also not unexpected. Quipped Drew Scheberle, Greater Austin Cham­ber of Commerce senior vice president of education and talent development: "I think every person in Austin is running for City Council." The math is pretty simple: Why run for an unpaid trusteeship, when you can run for a well-paid council seat instead? And even as those Council ballots fill to overbrimming, Scheberle sees no rush to move into the AISD races, and senses there may even be declining interest. "There were people who were chatting about it," he said, "who are not chatting about it any more."

So what happens if no one runs, either to replace Bradley or in any other seat? According to district legal counsel and chief of staff Mel Waxler, it's a matter covered under the Texas Constitution. If no qualified candidate wins on Nov. 4, then the incumbent is held over in his or her seat, until either the board appoints a replacement, or calls a special election for the next uniform election date.

There's still plenty of time for new candidates to emerge before filing opens on July 18. So far, no one has publicly declared a challenge to Schenider, but considering he faced opponents in 2002, 2006 and 2010, he is confident that he'll draw an opponent this time around. He's even heard a couple of names – "neither of whom has bothered to turn up to a school board meeting, to the best of my recollection." He even expects the Austin Kids First PAC, which promotes the "education reform" position, to recruit an opponent. As demonstrated by their candidate endorsements in 2012 (see "We're All About the ... Kids!" Oct. 19, 2012), he said, "They have a certain view that is not the same as what much of Austin has."

AKF definitely has the money to get involved. According to its January campaign finance report, the PAC held a $49,000 war chest, considerable in a school board race. The money came from two contributions in 2013: The first was a $50,000 check from Silicon Labs co-founder David Wel­land and his wife Isabel. The other was a $5,000 donation from the campaign of failed 2012 AISD board candidate Mary Ellen Pietruszynski. In a circular money trail, she had actually received more than $12,000 from Austin Kids First when she ran unsuccessfully against eventual At-Large Position 8 winner Gina Hinojosa.