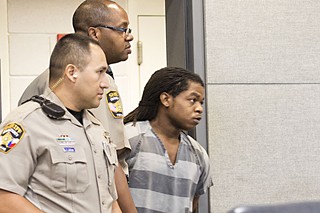 Rashad Owens, accused in the hit-and-run that left four people dead during SXSW, made a brief court appearance Wednesday. (Photo by Jana Birchum)

› There's no City Council meeting this week – next is June 12, with a lengthy draft agenda – but Council continues to review the staff-proposed budget, and on Saturday held its annual "Citizens Forum," halved from the scheduled three hours as not many citizens showed up; see "Council."

› Now there are five: After a lengthy courtship, the headliner arrived on the Sheryl Cole for mayor campaign, as the Mayor Pro Tem announced Sat­urday that she is indeed running for the city's top job; see "Finally ... Cole Declares for Mayor."

› On Wednesday, Rashad Owens made his first court appearance since his arrest for allegedly killing four people in the Red River hit-and-run. He appeared for about one minute before Judge Cliff Brown set his next court date for July 8.

› Travis County commissioners punted Monday on property tax appraisal reform, but will bring the matter back soon; see "Then There's This."

› Austin ISD has hired Iowa-based executive search firm Ray and Associates Inc. to find a permanent replacement for former Superintend­ent Meria Carstarphen. However, there is still strong debate about how soon a permanent hire should be made – whether it should be before or after the November board election.

› Bye, bye, Congress. As of June 3, Capital Metro has relocated all bus routes except the 100 Airport Flyer off the main Downtown thoroughfare. Instead, buses will travel north on Lavaca and south on Guadalupe, stopping at Fourth, Eighth, and 12th streets.

› The reconstructed and refurbished Bartholomew Park Pool reopens June 6, and on June 7, the city and the Trail Foundation celebrate the grand opening of the "Boardwalk" that completes the Ann and Roy Butler Hike-and-Bike Trail – featuring the SoundWaves, the Eastside Panther Drumline, and an aerial dance performance under I-35 by Blue Lapis Light. Go to austinchronicle.com/photos for sneak peeks of both.

› The city and Austin Firefighters Association announced that contract negotiations would resume later this month, under the cloud of a Department of Justice consent decree governing hiring that City Council accepted and that goes to federal court for approval – if not blocked by AFA intervention. Firefighters have been working without a contract, under civil service rules, since the city declared an impasse last year.

› A desperation play by the state in the ongoing school finance lawsuit. Attorney General Greg Abbott has filed a motion requesting the recusal of Judge John Dietz, claiming that he is not impartial. However, Dietz was given the case because he is acknowledged as the jurist with the best understanding of education funding.

› Following a new policy from the Obama Admin­i­stration that national carbon emissions must be cut by 30% by 2030, the EPA has instructed Texas to cut its emissions by 39%. Rather than face the shame of being a worse-than-average polluting state, Republicans have complained that the rule change will kill jobs.