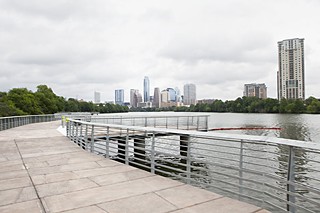 The new boardwalk along the south shore of Lady Bird Lake fills in a gap in the hike-and-bike trail and offers panoramic views of Austin's skyline. It opens to trail users June 7. For more images, see austinchronicle.com/photos. (Photo by Jana Birchum)

› Entering deep city budget season, the next regular City Council meeting is not until June 12, but today (Thursday, May 29, 1:30pm) is a budget work session, and Saturday 9am is the now annual Citizens Communication, 9am-noon at City Hall.

› And the rains came! Hardly enough to begin celebrating the end of the historic drought, but several inches over the last few days brought some real relief to the Highland Lakes.

› After a house party tour across the city, Mayor Pro Tem Sheryl Cole appears ready to launch her campaign for mayor, joining four other candidates in the race; she's set to make an announcement Saturday afternoon across from Lee Elementary.

› Faced with mounting financial instability, the Austin Water Utility is proposing deep budget cuts, possibly up to $33 million, with additional cuts likely in the future; at the same time, water rates could increase 13.2% – which is actually lower than what was initially anticipated. 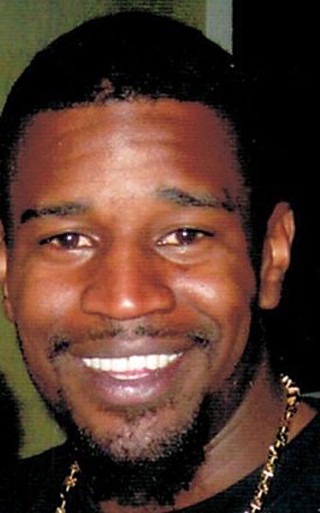 › On May 23, prosecutors released the autopsy report in the July 2013 police shooting of Larry Jackson Jr. (pictured), reflecting that Jackson was shot directly in the back of the neck, with the gun muzzle leaving its imprint. Austin police detective Charles Kleinert has been indicted for manslaughter in the shooting.

› The Austin Police Department's Memorial Day No Refusal DWI arrests were slightly up from last year. The APD made a total of 102 arrests for DWI and one BWI (boating) arrest. Last year saw 90 DWI arrests and 4 BWIs.

› The Texas gubernatorial race is becoming so low, you couldn't put a rug under it. Last week, Sen. Wendy Davis was greeted by life-sized "Abortion Barbie" posters during a Hollywood fundraising visit. This Tuesday, an intern for Attorney General Greg Abbott's campaign got carried away with the #AltWendyDavisBookTitle hashtag trend – tweeting the title "Mein Kampf for Publicity." The intern and the Abbott campaign have since apologized.

› On Tuesday, May 27, President Barack Obama announced that the number of U.S. troops in Afghanistan, after a war of a dozen years, will be reduced to 9,800 by 2015, cut in half the following year and effectively removed by 2016 – pending agreement by the Afghan government.

› Julián Castro is going to Washington. President Obama tapped the San Antonio mayor as his new Secretary of Housing and Urban Develop­ment May 23, prompting rumors of a possible 2016 vice presidential nod.