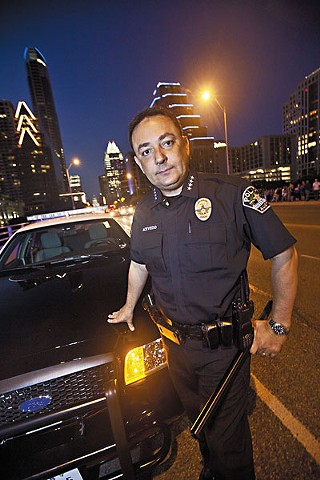 For thousands of Travis County residents, the most benign of traffic infractions – a broken taillight, an expired inspection sticker, or a simple moving violation – has led to the separation or destruction of their families.

Since 2009, county law enforcement officials, led by Sheriff Greg Hamilton, have participated in the "Secure Communities" initiative aimed at aiding U.S. Immigration and Customs Enforcement officials in deporting undocumented immigrants with criminal histories. To accomplish that, arrestees' fingerprints are submitted to the FBI, the information is shared with ICE, and a 48-hour "detainer" is implemented to accommodate a background check – a holding time that doesn't count weekends or holidays. That's when things start to fall apart for detainees – most of whom have no criminal record, but who are nonetheless deported at a rate of 19 per week from this area, according to civil rights advocates vehemently opposed to the initiative.

Even Austin Police Chief Art Acevedo has had enough of Secure Communities, expressing his displeasure over the corrosive effect the operation has had on hard-earned trust in Latino neighborhoods. "Whether they are legal or illegal, the people in those communities are our eyes and ears," said Acevedo in a telephone interview after returning from Washington, D.C., where he joined more than 40 law enforcement officials discussing immigration reform with President Barack Obama, Home­land Security Secretary Jeh Joh­n­son, and other administration officials. "Anytime we lose anything we've done to enhance that trust, it's a true loss."

Participation in the Secure Communities initiative is voluntary; since its inception, there have been about 4,300 deportations from Travis County, according to the Transactional Records Access Clear­ing­house database. In theory intended to target hardened criminals, the S-Comm initiative has instead engulfed immigrants with no history of crime. According to TRAC data, 73% of Travis County ICE detainers were placed on immigrants with no criminal conviction, while only 3% met the agency's definition of Level I serious criminal offenders.

Amelia Ruiz Fischer, an attorney and fellow at the Texas Civil Rights Project, confirmed Acevedo's warning of the program's alienating effect on Hispanic neighborhoods. In daily contact with an immigrant population, TCRP staff have learned that crimes, including domestic violence, increasingly are going unreported by victims fearful of deportation. "They'd rather deal with it than call the police and risk getting deported," Ruiz Fischer said. "We've heard this multiple times directly from domestic violence victims through our Violence Against Women program."

Since the advent of S-Comm, immigrant residents have come to view law enforcement officials as de facto immigration agents rather than protectors, she suggested. "Cops have become the gateway for deportation," she said. "When people see a uniform, they don't see someone who can help them, but a risk of deportation."

The requisite 48-hour hold for detainees often stretches longer over weekends or holidays, making it a violation of Fourth Amendment provisions of such safeguards as a judicially sanctioned warrant supported by probable cause, said Noralba De La Rosa of the Austin Civil Rights Coalition. "They're holding them although they've done nothing wrong," she said. "These are hard-working mothers and fathers."

A growing number of communities have stopped participating in the voluntary S-Comm program, De La Rosa added, because of its disastrous side effects and also because of the potential for consti­tu­tional violations.

Acevedo said he'd prefer to see solutions arise through comprehensive immigration reform – the subject of the police officials' discussion with the president – than through such dragnets. He blames politics for the prevailing emphasis on deportation regardless of individuals' threat levels. "When you have an economic downturn, you have to find a villain, and that is usually illegal immigrants," Acevedo said. "Pol­i­ticians have to blame somebody. It's bull­shit because these are real families, human beings, and that's not the American way."

Nevertheless, Sheriff Hamilton shows no signs of lessening his enthusiastic enforcement of the S-Comm program, despite a recent ruling in the U.S. Third Cir­cuit Court of Appeals confirming that the detainer requests are not mandatory, and an increasing number of local jurisdictions and law enforcement officials declining to participate. Hamilton was unavailable for comment last week, but Public Infor­ma­tion Officer Roger Wade offered a well-rehearsed response: "Sheriff* Hamilton has said he will honor ICE detainers, and we have no reason to change that view."

*Editor's note: Due to an editing oversight, Sheriff Hamilton was originally (and inaccurately) titled "Chief" Hamilton in this passage. It has since been corrected.