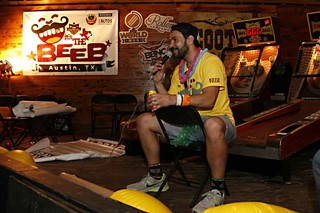 The eyes of the rapidly growing sporting subculture centered on Skee-Ball will fix upon Austin this week, as the boardwalk arcade game's most esteemed American league settles into the Scoot Inn on East Fourth Street to crown a national champion – and try to save their sport.

Brooklyn-based Brewskee-Ball has witnessed a wealth of success during its eight years in existence, turning a somewhat dinky idea – what if we took a silly game seriously? – into a league inhabiting four cities (New York, Austin, Wilmington, and San Francisco) on the strength of nearly 1,600 rollers. It's been covered by everybody: NPR, ESPN, the Chronicle, The New York Times. Sunday evening at the BEEB, Brewskee-Ball's annual, nationally attended roller's tournament, it crowns its fifth champion. Expect tears, cheers, and a whole lot of beers.

Sentiment surrounding this year's championship – held in Austin for a second time after a three-year run in Brooklyn – is expected to take new shape, however. It's the first BEEB to take place with the rollers' general knowledge that their league, the largest and longest continuously running Skee-Ball league in the world, is facing imminent danger – perhaps even extinction.

Since April 2010, league founder and Skee-E-O Eric Pavony has been trying to quietly settle a cease-and-desist order from Skee-Ball Inc., the Pennsylvania manufacturer that makes the lanes on which Brewskee-Ball rolls. The company's mandate is that Brewskee-Ball remove the word "Skee-Ball" from its name. Pavony – who successfully filed a trademark with the U.S. Patent and Trademark Office in 2008, three years after a handshake agreement with Skee-Ball Inc. CEO Joe Sladek supposedly allowed him to create the league (a conversation Sladek acknowledged under oath) – says there's no other way to make reference to the sport.

"They're trying to restrict us from saying 'Skee-Ball,' but we can't figure out a way to talk about it without using that exact word," says Pavony, who flew into Austin last Thursday in order to start prepping for this weekend's festivities. "It just so happens to be generic."

Indeed, imagine, for a moment, how difficult would have been for Major League Baseball to grow its audience in its early years if the Abner Doubleday estate had demanded MLB's commissioner and players to refer to the game as "four-baggers."

Or if Dr. James Naismith had declared postmortem that "basketball" leagues restructure as "roundball."

The league has lived in a state of diminished growth throughout Pavony's four-year effort to settle out of court, with city Skee-E-Os barred from properly promoting their leagues and product. Here in Austin, local Skee-E-O Eric Cooper, who moved to town in 2008 after working as a manager at Ace Bar in Manhattan, where Brewskee-Ball filled its first frames, suggests his 200-roller franchise could be three times larger if it hadn't been hampered by the lawsuit.

"It's an institution now," he says, referring to the three eight-week "skeesons" that take place at the Scoot Inn three nights a week for 24 weeks each year. "People know about it. They think of the Scoot as the Skee-Ball bar with bands, or the venue with Skee-Ball lanes. We've created something awesome and haven't been able to move it forward, because we don't know what this ruling is going to be."

He'll likely know soon. With conversations at a stalemate, Pavony has decided to take the case to trial, lawyering up with trademark specialists Fish & Richardson P.C. He's built a RocketHub fundraising campaign ("Skee the People") to raise the cash for F&R's representation, with the hopes of scoring $100,000. He'd raised nearly $24,000 when the Chronicle went to press on Wednesday, with another large sum expected from the BEEB this weekend.

"The only reason I do what I do is because I love this game," says Pavony, who calls his league "the most positive thing in the world."

"You think when I started this league that my end goal was to kill the Skee-Ball trademark? Absolutely not. It was the complete opposite. It was to promote the game in new markets with new demographics and come up with new ways to play the game socially. We thought Skee-Ball Inc. and our company were mutually benefitting from this and could coexist for many years. Then they had to go and do this.

"We've decided that now's the time to go public and turn what's been a really dark cloud in my life into a positive, uplifting thing."

The 2014 Brewskee-Ball National Champion­ship and BEEB Festival is Sat.-Sun., May 24-25, at the Scoot Inn, beginning at 2pm. For more information on the trademark dispute and the RocketHub campaign, see www.rockethub.com/projects/40657-skee-the-people.