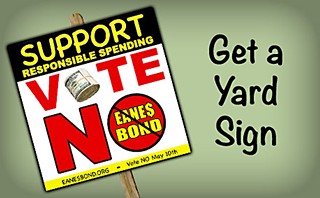 The anti-forces put the kibosh on the Eanes ISD school bond election.

In case you missed it: The May 10 municipal elections came and went without much of a fuss or many voters at the ballot boxes.

In terms of turnout, these elections had everything going against them. Sandwiched between the much higher profile primaries on March 4 and the upcoming primary run-offs on May 27, these were also for small governmental entities, such as the city of Bee Cave and the village of Briarcliff. The title for tiniest turnout went to Pilot Knob Municipal Utility District No. 2, which had five propositions and four permanent directors on the ballot, but only two people voting.

The good news for Travis County residents, most especially the elections division staff, is that all these races are now settled. Before election day, Travis County Elections Clerk Dana DeBeauvoir had noted the risk that some of the smaller mayoral or council elections could potentially go to run-offs, but after E-Day, spokesperson Ginny Ballard said there were clear winners in each reporting entity, whether by straight majority or plurality.

The biggest loss of the night was undoubtedly in Eanes ISD, where 55% of the 7,007 voters rejected an $89.5 million bond proposal. The money would have paid for essential school renovations, including a replacement elementary school that the district argued would better serve the current population. However, the plan faced an orchestrated and well-funded push back from Citizens for Academic Excellence in Eanes, a PAC founded by former school-board members Al Cowan and Clint Sayers. Through a combination of standard fiscally conservative cant, and grumbling that the taxes from Eanes residents would be spent on the 5% of students that were out-of-district transfers, they helped defeat the measure.

There was much better news for investments in education infrastructure in two other local ISDs, with Pflugerville and Round Rock voters approving all their investments by well over 50% of votes cast. Round Rock voters backed three propositions totaling $299 million, most of it going towards construction to cover growth and technology investments. Just a few minutes drive down I-35, Pflugerville voters passed a $287 million ask from the district, again mostly going to repairing and repurposing existing structures, and adding new construction to deal with the ever-increasing student population. As always, the passage of these bonds does not necessarily mean that residents will see any immediate impact on their property tax bill. The votes merely give the districts the authority to sell those bonds and pay them back out of taxes. However, the district may not issue them right away, or may structure their release so that any new costs are offset by rising property valuations or increased population.

The question now is how these votes will affect financial thinking in the county's biggest school district, Austin ISD. Its trustees have been considering asking voters to raise the maintenance and operations section of the property tax bill (covering day-to-day operating expenses like wages and power) since the last tax rollback election in 2008, but with little forward movement. They now seem to be edging towards a vote in either May or November of 2015. However, according to Board President Vince Torres, the board is also considering a small interim bond package to cover vital renovations and investments, and they could well feel more bullish after good results in neighboring districts.