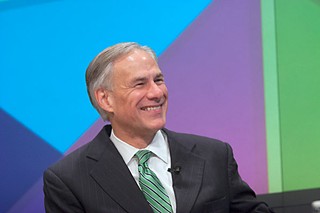 What did Attorney General Greg Abbott know about corruption at the Cancer Prevention Research Institute of Texas, and when should he have known it? Those are the questions Demo­crat­ic gubernatorial candidate Sen. Wendy Davis is asking of her Republican opponent, challenging whether he turned a blind eye as millions left the fund without oversight – and in spite of constant complaints by the agency's own experts.

It's become one of the potentially most damaging and pervasive scandals in recent Texas political history: A state fund, created to fight cancer, funneled cash to private firms with little or no oversight. It's a sad switch from CPRIT's origins as possibly the state's last truly bipartisan measure. In 2007, voters statewide passed Proposition 15 by a margin of 61% to 39%, creating the agency and allowing the issuance of $3 billion in bonds. However, lawmakers intervened in 2012 after a series of mounting scandals. A large number of CPRIT researchers quit over how multimillion-dollar grants were approved without sufficient scrutiny. The scandal broke after letters between the agency's chief science officer, Nobel laureate Dr. Alfred Gilman, and CPRIT's Chief Commercialization Officer Jerry Cobbs were released, in which Gilman repeatedly questioned the ethics of multiple grants, while Cobbs shot down his criticisms. Gilman finally resigned in protest over $20 million to local research incubator groups, and he was quickly followed by a slew of top-ranked researchers from bodies including the Harvard and Stanford medical schools, St. Jude Children's Research Hospital, and the Koch Institute for Integrative Cancer Research. By contrast, Cobbs is currently under indictment in Travis County for the first-degree felony of securing execution of a document by deception, regarding the granting of $11 million to Peloton Therapeutics Inc. In January 2013, CPRIT was subject to a damning report by Texas State Auditor John Keel, advising that it revamp every stage of the grant process, from evaluation to research progress, after which lawmakers effectively shut it down, and opened back up with increased controls and oversight.

Arguably, oversight was what was missing in the first place. It was supposed to be there, and Abbott was supposed to be providing it. From its inception, CPRIT had an oversight committee, which included both the attorney general and Comptroller Susan Combs. However, out of 23 committee meetings between June 23, 2008, and Feb 25, 2013, Abbott attended exactly zero. Abbott's campaign spokesman Matt Hirsch has since said that he removed himself, rather than face conflicts of interest. However, rather than stepping down completely, he sent designees from his office: Then-Deputy Attorney General for Legal Counsel Andrew Weber attended the first meeting, then the task was handed over to Deputy Attorney General for Government and External Affairs Jay Dyer, who would himself miss several meetings in the following four years. Hopefully, they were giving Abbott extensive notes, because he did not seem to be that inquisitive. The Dallas Morning News found that in his five years on the committee, Abbott sent a grand total of nine emails to "key state officials" on CPRIT's problems.

So what was keeping Abbott so distracted? Democratic pressure group the Lone Star Project went through Abbott's diary and compared his calendar with the committee's schedule, and found that on 10 of the 23 meeting days, he had no official events booked. And what kept him busy on the other 13? A lot of time with the press. He crammed 20 interviews and briefings into those days. He even skipped meetings at the height of the public scandal, after the release of the Cobbs-Gilman emails. On Oct. 24, 2012 (less than two weeks after some of the nation's leading cancer researchers had severed all ties with the agency in protest over its mismanagement and their concerns of nepotism in the incubator grant), both Abbott and Dyer were absent, even though the top item on the agenda was the discussion of hiring a replacement for Gilman. Instead, the state's top attorney was busy on Fox News ginning up a false controversy about international elections monitors visiting Texas to observe the Democratic process.

As the scandal grew in 2012, Abbott's office originally announced its own investigation into the CPRIT allegations. However, so far it has made no progress, and now Davis and the Democrats are impugning Abbott with more than just allegations of incompetence and disinterest. Instead, they are accusing him of turning a blind eye as his own campaign donors raided the fund's coffers. That's the same allegation that has hit Gov. Rick Perry – in fact, many Democrats have suggested that was the real reason that the governor effectively tried to blackmail Travis County District Attorney Rosemary Lehmberg into resigning after her DWI arrest. In that case, a grand jury has already been impaneled to investigate whether Perry committed a crime by cutting state funding for the Public Integrity Unit (the body charged with investigating corruption by public officials statewide, which operates out of Lehmberg's office).

Texas lawmakers have become increasingly queasy about Perry's pet projects, such as the Texas Emerging Technology Fund and the Texas Enterprise Funds (see "Perry's Fund Imbalance," Oct. 6, 2010.) But this is the first time these issues plaguing the governor's mansion have tracked back to the attorney general's office. The Lone Star Project calculated that companies owned by or invested in by Abbott donors received nearly $43 million from CPRIT, and that since 2001, those same beneficiaries of the state's largesse had handed almost half a million dollars over to his campaign.

Abbott has fired back that Davis' allegations are "offensive," and he's been trying to resurrect a conflict-of-interest scandal to retaliate. His campaign has revived old allegations – first deployed against Davis in her 2012 Senate re-election campaign – that her work as a lawyer for the North Texas Tollway Agency is part of an investigation by the FBI. However, an earlier investigation of Davis by the Travis County D.A. found nothing worth pursuing. Moreover, the NTTA has stated that the federal investigation is into current and former board members, and Davis has never sat on the agency's board.