May Elections: Twice the Fun 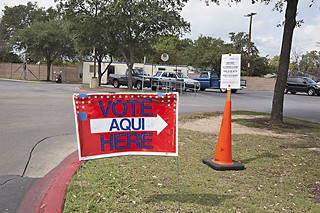 If you're working in the Travis County elections division, or if you live inside county lines but outside of Austin, then good luck: This month you've got two elections to handle.

May 10 is election day for a whole series of city and school district elections in smaller municipalities, either partially or completely contained within county limits. Residents of Bee Cave, Manor, Round Rock, Webberville, and West Lake Hills are picking new council members and mayors, while Briarcliff needs new aldermen, and Eanes, Lake Travis, and Manor ISDs all have board members on the ballot. On an even more localized level, Lakeway and Pilot Knob municipal utility districts, and Travis County Emergency Services District No. 2 all have measures on the ballot.

Most of these are uncontested seats, so there's much more attention been paid to school district bonds. Eanes ISD is looking for voter approval of $89.5 million for a new elementary, a new support services facility and building renovations, plus investment in IT, performing arts, and energy efficiency. Manor ISD is asking for $124.9 million for new high, middle, and elementary school campuses, plus school buses, while Pfluger­ville wants $287 million for new buildings, land purchase, and buses. Round Rock has actually split its ask into two propositions: $234 million in Prop. 1 for new middle and elementary campuses, and another $26 million in Prop. 2 for technology.

Unsurprisingly, these are low turnout elections. At close of early voting on May 6, turnout stood at 5.95%, but it's still put a strain on the Travis County Elections Divi­sion's resources. After all, this is just the first of two elections this month. Exactly nine days after this one finishes, early voting begins for the May 27 primary run-offs. "It's as confusing a thing you can imagine for voters to navigate," said Travis County Elections Clerk Dana DeBeauvoir. More­over, this may not be the end of it. While some of these entities decide the winner on a plurality, others need a majority winner. DeBeauvoir said, "Once we have this May election, we could have a late June, early July run-off."

It could be worse – two years ago, her office had exactly one day off between the local elections and the run-off – but this weeklong gap still requires setting up a whole new set of voting locations. It all seems very wasteful. Elections basically cost the same to administer whenever they are held, DeBeauvoir said, "and if you have partners to share the costs with, like a county or a big community college, you can go halves or thirds on the expense." That cost-sharing is part of the reason that the city of Austin, AISD, and Austin Commun­ity College rescheduled their elections to coincide with the November general election, but it was not the sole reason, she said: "They recognized that trying to have their major election in between the primary elections was too confusing for voters, and if they went for November they would have a much higher turnout and a much more democratic process."

There was discussion in the 2013 Legislature about stopping this seemingly endless cycle. While the committee had no issues with local votes in odd-numbered years, DeBeauvoir said, "It's only when it conflicts with the primaries that it causes a problem." The smaller entities lobbied hard and defeated the measure before it could get to the floor, but DeBeauvoir expects it to return for debate next year.

Starting May 19, all eligible Travis County voters can cast their ballots in the primary run-offs, with both parties still seeking to finalize statewide nominations. Top of the Republican ticket is the increasingly vitriolic fight between former uncomfortable allies, as Sen. Dan Patrick, R-Houston, attempts to oust Lt. Gov. David Dew­hurst. Meanwhile the attorney general race sees two state legislators on opposing sides, as Higher Education Com­mit­tee Chair Dan Branch, R-Dallas, tries to out-conservative his former chamber mate, state rep turned state senator Ken Paxton, R-McKinney. It's a battle of ex-lawmakers for the agriculture commissioner nomination, as former Longview state Rep. Tommy Merritt, who was purged by his own party in 2010, faces one of the purgers: Stephenville's Sid Miller, author of the notorious mandatory pre-abortion sonogram law, who was in turn purged by the Tea Party in 2012.

On the Democratic ballot, there's been eye-rolling amongst party activists about how some of their candidates are still running. In the race to displace GOP Sen. John Cornyn, Dallas-based dental tycoon David Alameel has picked up the endorsement of gubernatorial hopeful Wendy Davis, but he still must get past Kesha Rogers, a two-time failed congressional candidate who claims she's a loyal Democrat but constantly retweets Lyndon LaRouche (the L. Ron Hubbard of right-wing conspiracy nuts). If Rogers wasn't bad enough, perennial showboater Kinky Friedman used name recognition and weed to get into an agriculture commissioner run-off with farmer Jim Hogan, who has resolutely refused to campaign.