Farmers market takes its act on the road 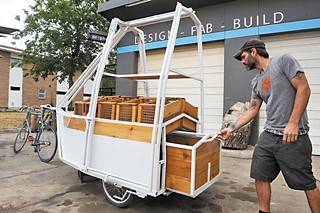 Christian Klein of Drophouse Design demonstrates one of the many moving parts of the food cart. (Photos by John Anderson)

After more than four years of hosting a small but lively market near East Fifth and Comal, HOPE Farmers Market is taking its act on the road with some help from local design firms Studio Modo and Drophouse Design. This month, HOPE debuts its new bike-powered farm stand, the result of a collaborative effort that promises innovation not only in its elegant design but in its model for bringing healthy food to communities most in need. 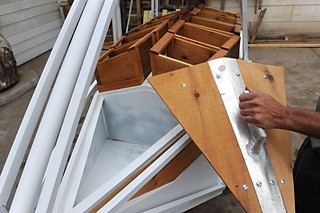 More than 89,000 low-income residents of urban Travis County live one mile or more from the nearest grocery store, according to data from the U.S. Department of Agri­cul­ture. A mile may be insignificant by car, but hauling groceries is a different matter by foot, bike, or bus. For people without wheels, life in a food desert is more than just inconvenient. What such areas lack in fresh produce, they tend to make up for in fast food – and that's a combination that makes for poor health outcomes in already vulnerable communities.

Increasingly, farmers' markets are stepping in to fill this nutritional gap, which is one reason why East Austin – not the only area with the most food deserts in urban Travis County, but probably its most visible – has attracted so many farmers' markets in the last few years. Sunday markets have cropped up at both the Mueller Develop­ment (Texas Farmers Market) and Plaza Saltillo (HOPE Farmers Market). A Tuesday market run by the Sustainable Food Center near the MLK MetroRail stop is trying to attract evening commuters. Two miles south, the recently expanded hours at Boggy Creek Farm Stand (open four days a week) similarly reflects a growing desire to accommodate a wider variety of schedules. 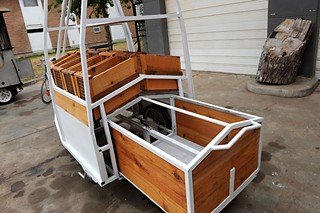 Ultimately, however, farmers have to farm. They can't man market booths 24/7, much less be everywhere markets are needed – that's where HOPE's mobile farm stand comes in. HOPE Director Jessie Cur­ry says HOPE will be able to buy fresh produce from its market vendors and then take it to schools, libraries, and community centers, where people already go on a regular basis. The strategy benefits both customers and vendors, allowing HOPE to extend the life of the Sunday market's surplus produce – "stuff that would otherwise get composted and wasted," says Curry.

Though limited in its range, the bike can comfortably reach any area within HOPE's neighborhood, says Curry, which is bordered by I-35, Cesar Chavez, Airport Boulevard, and MLK Boulevard. Within that target community, HOPE will develop a scheduled route, to be implemented this summer. Asked why HOPE wanted a bike-powered stand – rather than, say, a food truck – HOPE staffer Ray Ray Mitrano points not just to the bike's environmental and cost benefits but also its flexibility. Because it's small, it can fit a wider variety of situations and respond more nimbly to its environment. This characteristic is especially helpful "if you don't know where the foot traffic is going to be," he adds – if a setup isn't working, "we can just turn the bike around." 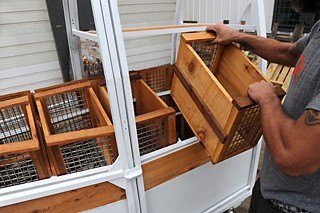 Despite its simplicity, the work that went into the bike's design was anything but. The project began in October 2012 with a design competition sponsored by the American Institute of Architects – Austin to benefit HOPE FM. The winning design belonged to Studio Modo, where UT assistant professor Clay Odom is creative director. He then reached out to Christian Klein, who runs small Eastside firm Drophouse Design, to help solve some of the design challenges he faced. The construction has taken eight months, with the team still working on the final touches last week.

Part of the challenge has been "figuring out the geometry and all the moving parts," said Klein last Wednesday as he looked over the nearly finished project. Odom agreed, motioning to a hidden storage drawer that pulls out of the back. "It moves in so many different ways: It rolls, it folds, it pulls out. It has lots of working pieces and little mechanisms."

Rather than following a push-bike design – which would have been more traditional, said Odom – this cart is designed to be pulled, so that it can attach to any bike. It's also compact and lightweight, thanks to its aluminum skeleton. The cart provides shade, for both produce and people, with two large, fold-out "wings," which were getting finished on Wednesday. Across Drophouse's front lot lay the sprawling, faded remains of two vinyl billboard signs, which the team planned to stretch across the wings' frames. "We played around with different conceptions of recycled or upcycled material," says Klein. Having settled on the billboards, he noted, "the last thing is the patterning." He hoped to create a dappled light under the wings while also making the material more porous, to minimize wind resistance.

Ultimately, the project is a "work in progress," the team agreed. They expect some trial and error in figuring out, for instance, how much weight the cart will ideally haul. "Greens shouldn't be a problem," said Cur­ry. "But maybe," Odom added, "we should hold off on the watermelons."