Then There's This: SMART Is as SMART Does 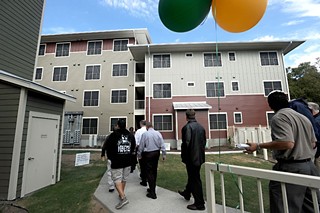 Last week's City Council discussion on potential changes to the city's SMART Hous­ing program offered some interesting insight into the upcoming District 9 race between incumbent Council Members Chris Riley and Kathie Tovo. As well, it underscored the tension between the two colleagues-turned-opponents as they try to distinguish themselves from each other on two important issues: transit and affordability.

In this case, though, the conversation on the dais last week – as it has in previous Council discussions – threatened to dissolve into a transit-vs.-affordability debate.

Both are key components of the entire SMART Housing package, with the acronym meaning "safe, mixed-income, accessible, reasonably priced, and transit-oriented." The policy was adopted in 2000 under former mayor Kirk Watson's "smart growth" administration, but in 2008, city housing officials relaxed the T component to increase developer participation. On that score, guidelines for housing's proximity to a bus route was stretched from a quarter-mile to a half-mile, then given some more wiggle room.

Riley's goal is to put the muscle back in the T by way of a code amendment to move away from the "as-the-crow-flies" (as he refers to it) mapping method for determining the proximity of housing to transit. But Tovo, along with staff and affordable housing advocates, worry that beefing up the "T" requirement in the land development code could impede a city goal of creating affordable options in all areas of town.

In the end, the Council did vote to move ahead on initiating a code change, but only after Council Member Bill Spelman added an amendment that broadened the emphasis in Riley's original resolution to include potential revisions to all five elements of SMART housing.

The vote was 5-2, with Tovo and Laura Morrison casting the no votes; they instead favored gathering feedback from stakeholders, which staff would then present to Council in the form of recommendations. Tovo had, in fact, initially presented such a plan to Riley as a "friendly" amendment (asking him to incorporate it without a vote).

By initiating a code change, Tovo said in laying out her motion, "we're setting ourselves on a path that is eventually going to result in creating impediments to the construction of affordable housing rather than encouraging it. And I know we all share a goal of encouraging as much affordable housing as we can ... and that's really going to be a challenge if we adopt this as a policy and set out on the path of a code amendment."

But Riley responded that Tovo's amendment would defeat the purpose of his resolution. He went on to express concern that the city is perhaps too eager to approve affordable housing developments in transit-poor areas of town without consideration for those low-income people who don't own cars. "It's critically important that this Council step up, adopt in our code policies that reflect our Comprehensive Plan and the need to situate housing near transit," he said. "And for that reason, I think it's very important we reject [Tovo's] amendment and we proceed with a code amendment."

And because Riley had singled out a transit-poor project by name in explaining his rationale for voting against it a few weeks previously, the project's developer, Foundation Communities' Walter Moreau, felt compelled to respond. Referring to a fair housing claim in Dallas that forced requirements for more geographically dispersed projects, Moreau said he and other affordable housing developers are now being driven to build or renovate in higher-income areas as they seek to leverage state and federal tax credits. That's one of the reasons the nonprofit's Cardinal Point project landed in the Four Points of West Austin, he said. Apart from the lack of accessible transit, the location offers plenty of perks for low-income families – over 500 retail and service jobs are located within a mile of the site, and kids will have an opportunity to attend good schools. Moreau will find out this summer whether the project wins approval for state tax credits, and he's concerned that a code change could hinder those chances.

"If you adopted a policy that required a quarter-mile or half-mile bus stop, you're basically saying no affordable housing in West Austin. So then you're going against another policy goal to have affordable housing [in] all parts of town." While Riley added some exceptions to his resolution to help developers avoid potential pitfalls for qualifying for state tax credits, Moreau said he's still nervous about initiating a code amendment, because state and federal housing requirements can change from year to year.

"If Austin doesn't craft this right ... the [housing] deals that will win will be in the suburbs," Moreau said, "and they're even more transit-poor."