Central Corridor Rapid Transit: Project Connect is almost finished with its Locally Preferred Alternative transit route map. The two main remaining questions: whether to bridge or tunnel across Lady Bird Lake, and how to get from 41st & Red River to 53rd & Airport Blvd.

Study leader Kyle Keahey told the Chron­icle that the project is focused at this point on three key decisions: 1) urban rail or bus rapid transit; 2) a bridge, short tunnel, or long tunnel to cross Lady Bird Lake; 3) an eastern or western tunnel for the Hancock alignment.

Even at this late date, Project Connect is still considering both urban rail and Bus Rapid Transit as potential modes. Urban rail, at an estimated build-out cost of $65-80 million per mile, is more expensive. Each urban rail vehicle, which costs about $4 million, has a typical life span of 25 years; powered by offsite-generated electricity, rail cars offer better acceleration and deceleration than buses. They can carry up to 195 people per vehicle (expandable by additional cars), would be quieter, cleaner, and more comfortable than BRT, and as permanent installations, would attract more consistent economic development. However, urban rail comes with a much higher capital cost, would require a new maintenance facility, and is more far expensive to modify or extend than BRT.

BRT is the cheaper option basically across the board, costing an estimated $40-50 million per mile to build and $800,000-900,000 per vehicle – significantly lower capital cost and utility impacts – and could utilize existing bus maintenance facilities. Derek Benedict, a transportation engineer at URS Corporation, said that like urban rail, BRT would have designated lanes, allowing riders to avoid the traffic problems of mixed-traffic buses. Powered by diesel or natural gas, BRT offers a tighter turning radius than urban rail, but also causes more noise and emissions. At 100 passengers per bus, BRT would require more vehicles to meet the same capacity as urban rail, and buses have a typical life span of 12 years. And for economic development purposes, BRT is less predictable and less permanent than a rail line. 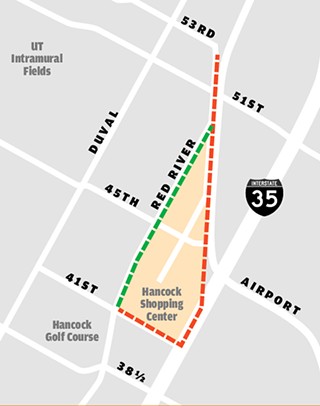 The Hancock Tunnels: The draft plan now includes a tunnel from Hancock Center to Airport Blvd., on one of two routes: A western option would go straight up Red River; the more expensive eastern option would include a Transfer Station near Airport and I-35.

Todd Hemingson, Capital Metro's vice president of strategic planning and devel­op­ment, said that Project Connect is giving both urban rail and BRT full consideration, as each has advantages and disadvantages; but both Benedict and Hemingson suggested that both planners and the public seem to be leaning toward urban rail.

Project Connect planners are also deciding among three options that would cross Lady Bird Lake to connect an East Riverside Drive route to Trinity Street. The least expensive option, at approximately $175 million, is to build a new bridge over the lake. The bridge could also become a signature structure for the city, including access for cyclists and pedestrians. However, there are issues that would need to be resolved in advance, including traffic interaction on Trinity, diminished parking, special event conflicts, and even a potential conflict with the Waller Creek Boathouse.

The second option, at an estimated cost of $240 million, would be a short tunnel, starting a few hundred yards south of the lake and rising at Fourth and Trinity (thereby avoiding conflict with the boathouse). Furthermore, this would allow future connectivity to South Congress and South Lavaca, as well as future capacity/system expansion. But like the bridge option, the tunnel could also create problems affecting auto capacity, parking, and other issues at the northern portal, and possibly interfere with Convention Center operations. (There is also a question of whether the Federal Transportation Authority, a potential source of funding, would consider a tunnel cost-effective.)

The third option – a long tunnel extending all the way through Downtown and emerging at 15th Street – is by far the most expensive, at an estimated $475 million, and faces the same FTA issue. But it would include underground stations, would be less visible and obstructive, and provide greater reliability and capacity, accommodating higher speeds and higher frequencies, without having to interact with Downtown traffic. The long tunnel would avoid issues with the boathouse and also Sixth Street, and wouldn't interfere with Trinity Street.

The part of the plan that will likely come as a surprise to most people is that there is now another tunnel being contemplated on the north end of the route, running from 41st Street to Airport Boulevard at or near 53rd Street. Actually there are two potential tunnel options: west and east. The western route, estimated at $230 million, is more direct, would mean shorter travel time, and is consistent with existing plans for development on Airport. It would include an at-grade station at 41st and Red River, and would proceed straight north from there. The eastern option (which would dog-leg along 41st to I-35 and then up Airport) would be more costly, but would enable transfers from the existing Red Line commuter rail at a new Red Line transfer station on the east end of Hancock Center, and would also more readily enable future connectivity to the Mueller neighborhood. Including its below-grade station, it's more expensive ($290 million), and because it briefly runs parallel to the Red Line, it will appear to rail critics as a duplication. It would also require acquiring property and displacing some businesses along the I-35 frontage.

Going forward, at the CCAG meeting on May 2, the Project Connect team will discuss its end-to-end LPA recommendation, system connectivity, funding and governance, rough order-of-magnitude cost estimates, and ridership estimates. Then on May 16, Project Connect will again meet with CCAG to further discuss the issues, as well as phasing options for the project and the scope of additional system planning and project definition, and then will brief City Council on May 22. June will move us closer to a final decision. In addition to a to-be-determined special session for City Council, on June 13 CCAG will take action on the recommended LPA and first phase. Later in the month, Capital Metro (June 23) and City Council (June 26) will make decisions in preparation for the likely November ballot.

However, the entire plan is still very much a work in progress, and, as Austin Urban Rail Program Manager Scott Gross noted, some aspects of MetroRapid and the Red Line weren't located and decided upon until during construction.