A Walk Through the New Colony Park 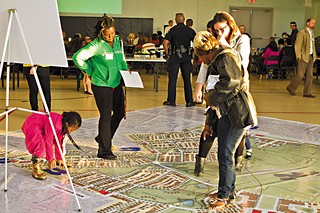 The team working on a new neighborhood at Colony Park unveiled its draft master plan Monday night, and residents walked all over it.

The planners had spread an oversize map of the development on the floor of the Multi-Purpose Facility on Colony Loop Drive, and neighbors explored on foot its miniature streets and parks. Several sets of footprints on the map pointed toward easels that held renderings of the "view" a person would see from that vantage point.

The project will develop 208 acres of city-owned land, and about 65 acres of dedicated parkland, on Loyola Lane between Johnny Morris Road and Decker Lane. Monday's draft plan was based on input from three previous community meetings in which residents indicated their preferences for the neighborhood's composition and design.

The draft plan includes four distinct but overlapping neighborhoods, each anchored by a community center and public park. "A lot of development around town doesn't aspire to be a neighborhood – it's just a subdivision," said designer Doug Farr. (The master plan design team includes the Urban Design Group of Austin and Farr Associates of Chicago.) Farr emphasized that one goal of the public spaces is to encourage a neighborhood mentality by drawing in people from the surrounding communities – in other words, the people at Monday's meeting.

Farr's comment referenced current residents' key concern: how the new neighborhood will relate to the existing ones, literally and figuratively. Neighbors were generally pleased with the development's potential to reduce crime, and with the convenience of having groceries and coffee shops closer to home. Some, citing displacement of communities in central East Austin, said they were worried their property taxes would rise.

Miguel Flores grew up near the proposed neighborhood but literally on the other side of the railroad tracks. He pointed out that to get around the tracks to the new amenities, his parents and their neighbors would have to walk a long way around the perimeter of the neighborhood on busy streets. "We're still isolated from the new things coming in," he said. "My parents will see their tax burden increase but, in the current plan, they won't have easy access to the neighborhood." Flores said he was pleased with the plan's mixed-use centers and mixture of housing types, which might allow him to move back near his parents.

Conversation at Flores' table lingered on how the new neighborhood could attract young families, which could positively reframe perceptions of Colony Park.

Rosangely Hernandez is a realtor who lives east of the proposed development. She said she'd sold many homes in Northeast Austin neighborhoods near Colony Park, and as far east as Manor, to young families who made $30,000 to $40,000 a year and had to focus their housing search on the outskirts of Austin. "I can definitely see them wanting to buy here," she said. "They work in Austin, not Manor. When I see that 110 people moving here [to Austin] every day, where are they going to go? Comparatively speaking, this seems pretty close to Downtown."

The draft plan is available for comment at www.colonyparkatx.org, or by calling 512/974-3100. On June 23, a revised master plan will be shown at an open house at the Multi-Purpose Facility; it is scheduled to be presented to City Council July 1, and for approval in early fall.