The Education of Greg Abbott 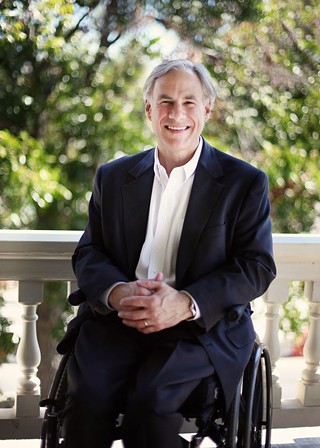 When Greg Abbott (top) weighed in with an education plan, Wendy Davis threw the book at him. (Photo courtesy of Greg Abbott Facebook)

Someone might want to tell Attorney General Greg Abbott to pick his friends better. In February, he took a political licking for hanging out with former stadium rocker turned right wing controversy machine Ted Nugent. Now the Republican gubernatorial hopeful is in trouble for using research from an accused white supremacist to back up his public education plans.

This seeming gift to his Democratic opponent, Sen. Wendy Davis, D-Fort Worth, came March 31 when Abbott's campaign released his latest policy document, "Educating Texans Plan: Pre-K–Third Grade." While Davis established her national reputation during last session's reproductive rights debate, her earliest high- profile moment was filibustering huge cuts to education in 2011. With Abbott finally stepping into the education forum, it seemed they were heading for a conventional argument about spending and budget efficiency. That was until the Davis campaign pointed out a footnote in Abbott's policy document, a citation for the assertion that "family background has the most decisive effect on student achievement, contributing to a large performance gap between children from economically disadvantaged families and those from middle-class homes." Scarcely a radical statement: In fact, the Abbott campaign could have cited work by pretty much any contemporary education researcher. However, they cited Real Education by Charles Murray, in which he argues that college is effectively wasted on most people, and that academic resources should be concentrated on a small group of existing high-achievers.

That's far from the worst thing Murray has said. He has spent the last two decades defending his 1994 book The Bell Curve, which has been castigated for its take on race and gender. The Southern Poverty Law Center has condemned him as a white nationalist, attacking him for arguing that women and minorities are genetically predisposed to underachieve: Or, as he wrote in 2005, that there have been no great female philosophers, composers, or visual artists in part because of the "respective strengths of male and female cognitive repertoires."

Davis' campaign immediately blasted Abbott. Decrying what she called "Charles Murray's Educa­tion Plan," Davis said, "Abbott's plan of pre-K for the chosen few but not for all hardworking Texas children would set our state backwards at a time we need to prepare for a 21st century economy."

Even before Davis' researchers leapt on the Mur­ray connection, Abbott was already taking a mauling from his claims about pre-K funding. His plan argued that "while fostering early childhood development is an important educational goal, studies show that existing prekindergarten programs fail to produce lasting benefits." To back that claim up, rather than using traditional education research journals, he cited the conservative policy publication/libertarian mouthpiece National Affairs­. Then he proposed introducing Reading Excellence Teams to mentor teachers in grades K-3, and a pilot pre-K program to create a new "gold standard" in early education. In fact, Abbott argued that expanding pre-K without further research would be "an act of negligence and waste."

Cue eye-rolling from Texas American Federation of Teachers President Linda Bridges, who said, "With champions like Greg Abbott, early-childhood education doesn't need enemies." While Abbott suggests a small investment in his preferred projects, it would be a drop in the bucket compared to the $5.4 billion in education cuts from 2011 that Abbott is still defending in court. Noting that Abbott's position on the value of pre-K is out of step with both research and most Texas lawmakers, Bridges wrote, "He implied that we don't know enough to identify and fund effective pre-K models for all, despite a ton of research evidence that says we most certainly do." Texas State Teachers Assoc­ia­tion President Rita Haecker echoed that sentiment. Noting that Davis, in her Great Start: Great Texas policy proposal, called for an expansion of pre-K, she wrote, "The only guarantee in Greg Abbott's plan is more standardized tests – starting with tests for four year old kids."

Abbott's campaign initially tried to dodge the Murray issue, and instead put forward a fiscally conservative response. His communications director Matt Hirsch said that, "Looking at the numbers, it's clear that Greg Abbott's Educat­ing Texans plan is robust, specific, and solution-oriented while remaining fiscally responsible while Sen. Davis' plan goes short on substance and big on spending."

Abbott finally tackled the issue head on in an April 2 visit to the IDEA Carver Academy in San Antonio. He charged that Davis' campaign was concentrating on "petty things like looking at some comment that someone may have made who was cited in a footnote." While that's strictly true, it's worth noting that Murray served on the board of National Affairs, and Abbott's education platform cites that publication four times.

It's unclear so far whether Abbott's dalliances with the fringe right will damage his campaign. Considering it is seen as a barometer of Texas' potential change from a red state to a purple one, polling in this race has been surprisingly light. For most of the election cycle, Davis has trailed Abbott by around 12 percentage points. However, Abbott's lack of support from women and minorities is already seen as his Achilles' heel in this race, and Davis may take some succor in the most recent survey, conducted March 7-12 by the Emerson College Polling Society, which put her only seven points behind her Republican opponent. This came after the Nugent debacle, so the questions for Davis now are whether her campaign can hope Abbott keeps making the same missteps, and whether she can either pull away enough moderates or mobilize enough undecideds to cut deeper into his lead.