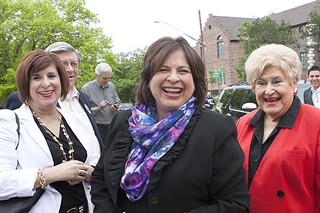 › Speaking of the Summit, which honors the 50th Anni­versary of Lyndon Johnson signing the 1964 Civil Rights Act, it has thus far featured panels on gay rights and immigration, Mavis Staples and Graham Nash, and Jimmy Carter. A very tough ticket, but live-streamed at www.civilrightssummit.org.

› A first court appearance for Rashad Owens, charged with one count of capital murder and 20 counts of aggravated assault with a deadly weapon in connection with the SXSW Red River hit-and-run, has been rescheduled. Originally slated for Wednesday morning, Owens will now not appear in court until April 30.

› Plenty of transportation planning action this week, with movement forward on urban rail, TxDOT's I-35 Improvement Plan, and the Airport Boulevard Corridor; see p.16 for more.

› A highly unseasonable storm ripped through Austin on April 7, downing trees and causing power outages to 12,000 Austin Energy customers – including the AISD board of trustees, which had to cancel its Monday meeting.

› Controversial UT System Regent Wallace Hall may be one step closer to impeachment, after members of the House Select Committee on Transparency in State Agency Operations received a 176-page draft report concluding that he leaked critical student information, violating both state and federal privacy laws, and coerced UT staff to alter their committee testimony.

› Special prosecutor Michael McCrum said he is "very concerned" about the legality of Gov. Rick Perry's 2013 veto of state funding for the Travis County Public Integrity Unit: Perry deleted the line item from the state budget after District Attorney Rosemary Lehmberg refused to resign over her DWI conviction. McCrum confirmed that a grand jury is being empanelled to consider charges.

› Rep. Paul Workman, R-Austin, has been named to the new House Select Committee on Transport­ation Funding, Expenditures, and Finance. Speaker Joe Straus has already described transportation as one of the top issues for the next legislative session.