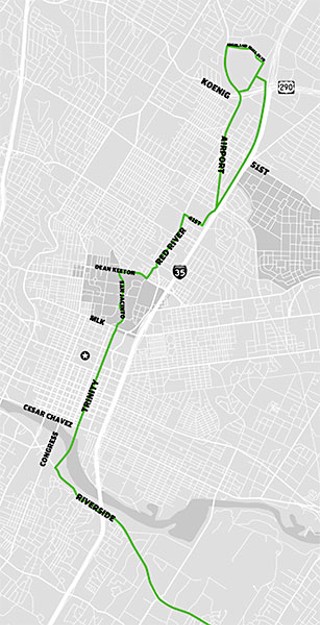 While a final mass transit recommendation isn't expected until May – to be brought to Austin voters in November – the Project Connect team is getting closer to an official recommendation to City Council. On March 21, the Central Corridor Advisory Group discussed the latest work-in-progress, followed up with a briefing at last week's Council meeting. Project Connect is considering three options for crossing Lady Bird Lake, in order to connect an East Riverside Drive route to Trinity Street. (The briefing also featured 15 proposed station locations.)

Although rail remains the preferred option, planners continue to consider Bus Rapid Transit. Julie Mont­gom­ery, who serves on CCAG and is also on the executive committee of Austinites for Urban Rail Action, says that questions remain over the mode, how to cross Lady Bird Lake, and how to prioritize the different corridor phases (i.e., East Riverside vs. Highland).

Currently, one option is to build a new bridge over the lake to Trinity Street. A rail bridge would cost an estimated $175 million, with the bridge alone costing $75 million, and $100 million for the ground-level track from East Riverside to 15th Street; a BRT bridge would be 30% less. This is the least expensive of the three current options.

The second option is to build a tunnel starting a few hundred yards south of the lake, and rising above ground at Fourth and Trinity. That estimate totals $245 million, with the tunnel itself costing about $175 million, and the rest for the track from River­side to 15th; BRT would be about 25% cheaper. (The tunnel options are more expensive, but would avoid potential conflicts with vehicle traffic.)

The third option is a longer tunnel – along with underground stations at East Fourth and 12th streets – that would emerge around 15th Street. At $475 million, it's by far the most expensive (as BRT, the cost could drop by about 15%). But the longer tunnel would eliminate many traffic problems, and offer a smoother ride by avoiding the hill between Sixth and 14th streets.

Not every transit advocate is happy about the choices. Mike Dahmus of AURA commented, "We've gotten to the point now where it's arguing about three equally ridiculous options, none of which are feasible or efficient or reasonable." Dahmus believes a better choice would be to retrofit either the Congress Avenue bridge or the South First Street bridge. Capital Metro/Project Con­nect spokesman John Julitz said using an existing bridge is currently not a preferred option because "the existing structures are already at capacity, and reducing lanes of traffic to accommodate any form of high-capacity transit would have a significantly detrimental impact on traffic flow in and out of Downtown."

But Montgomery said, "I think we really ought to look more into what the actual details would be if we did want to retrofit the South First Street bridge. It's more centrally located, and it would be cheaper, and it would set us up better for eventually heading up toward Guadalupe and Lamar."

Julitz says that the CCAG will determine if these will remain the only three options, or if it will instead direct the project team to reconsider using the existing bridges. AURA and other advocates continue to see the Lamar/Guadalupe route as a priority, and consider the initial route decisions as determining whether that route remains feasible. Montgomery said that AURA "would like to see rail put in the East Riverside area first, because East Riverside already has a high transit ridership," as opposed to the Highland area, which would be "very risky" for a number of reasons, including because "we don't have the population to support [transit in Highland] yet."

The argument remains increasingly polarized, as reflected in the recent creation of a political action committee – "Our Rail" – formed to oppose any Highland rail route, and perhaps to place a charter amendment on the November ballot to require a Lamar/Guadalupe route. Scott Morris, listed as treasurer for the Our Rail PAC, said the group has made no certain decision on a charter petition, but that such an amendment would "direct the city build a minimum operable segment of light rail in the Guadalupe-North Lamar corridor before other corridors."

Morris said, "I think that the city would be wise not to put this [Highland] on the ballot. But if it does make it on the ballot, I think, in a failed referendum, the people are prepared to get back on the horse and get this pointed in the right direction. I think that that can happen quickly. There's evidence in other jurisdictions, such as Seattle, that a bad plan can be fixed and represented to the public in a short period of time, and I think that that can happen in the inter-election period. I think we can expect that that happens in the 2016 time frame."

So depending on what proposal finally emerges from the CCAG and Council, the city may find itself balloting a plan to which some transit advocates have already declared fierce opposition. According to the working Project Connect timeline, CCAG will decide on routes and phases in May and June, and Council would anticipate a ballot recommendation in August.