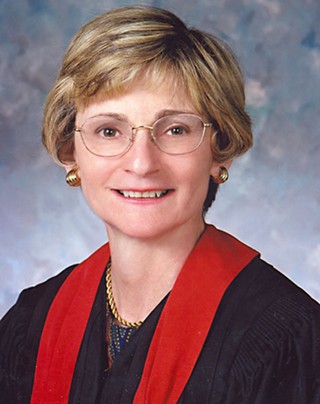 In its March 27 opinion, the court found – based on the state's assertions that the restrictions were motivated by the desire to promote the "health and safety" of women seeking abortion – that a "rational basis" for the restrictions exists, even if the notion that the restrictions are needed is based on "probabilities" and is "unsupported by evidence or empirical data." The appeal court judges argue that the very fact that "reasonable minds can disagree on the legislation ... suffices to prove [it] has a rational basis."

Such is the unamusing irony of the decision, delivered in often condescending prose by notoriously conservative Judge Edith Jones. In this ruling, Jones takes the same tone as in 2012, when she forestalled review of Texas' forced-ultrasound-before-abortion law by District Judge Sam Sparks, by abruptly and abrasively concluding the law constitutional before Sparks had an opportunity to fully consider the case.

There was therefore less shock than outrage from women's health and reproductive rights advocates over the ruling delivered Thursday afternoon. "The Fifth Circuit has turned a blind eye to the very real and devastating consequences that this law has had on thousands of Texas women, erecting barriers to abortion so high that women are simply left with no legal or safe options," said Nancy Northup, president and CEO of the Center for Reproductive Rights, which represents Whole Woman's Health, one of the plaintiff abortion providers.

The specific provisions at issue were: 1) the requirement that pharmaceutical abortion follow an outdated Food and Drug Administration-approved protocol; and 2) the requirement that all abortion doctors have hospital admitting privileges within 30 miles of each clinic where they perform the procedure. Planned Parenthood, Whole Woman's Health, and the ACLU, along with individual doctors, sued to block the provisions, claiming they had no rational basis and that they create an unconstitutional undue burden on Texas women seeking access to legal abortion care.

During a trial last fall, the plaintiffs offered evidence from WWH that its five clinics would close if the admitting-privileges provision took effect because it could not secure the privileges from hospitals – though it was attempting to do so – and that if the provision took effect the only two clinics in the Rio Grande Valley, one of which was owned by WWH, would close. The plaintiffs also offered the testimony of Prof. Joseph Potter, a UT-Austin Popula­tion Research Center sociologist who is part of the Texas Policy Evaluation Project, which had demonstrated that should the provision take effect, more than a dozen of the 32 abortion clinics in the state would shutter operations, leaving more than 22,800 women without access to care.

State witnesses countered that the provisions are needed to protect the health and safety of women by ensuring that a woman seeking care for any complications would have ready access to a nearby hospital, and that patients unable to visit a closed clinic would be accepted by others. U.S. District Judge Lee Yeakel ultimately ruled that the law was unconstitutional, and blocked it from taking effect. The Fifth Circuit stepped in two days later, allowing the law to take effect while it considered the state's appeal. The ruling this week essentially affirms the court's earlier, Oct. 31, 2013, judgement.

According to the Jones' opinion, Yeakel's ruling – agreeing that the law lacked rational basis and presented an undue burden on women – was "vague and imprecise," and credited unsupported evidence of clinic closures. Notably, Jones wrote that Yeakel's citation of testimony that the only two abortion clinics in the Rio Grande Valley would close, leaving women in South Texas without any local access, should be "disregarded as clearly erroneous based on the trial court record." And even if those clinics did close, she reasoned, women in the Valley would only have to travel to Corpus Christi, which would take "less than three hours on Texas highways." "Although some clinics may be required to shut their doors," Jones wrote, "there is no showing whatsoever that any woman will lack reasonable access to a clinic within Texas."

The appeals court concluded instead that requiring "admitting privileges would ... promote the continuity of care in all cases, reducing the risk of injury caused by miscommunication and misdiagnosis when a patient is transferred from one health care provider to another." Jones also dismissed the notion that HB 2, with its 30-mile radius requirement for admitting privileges, is more burdensome than a law that would require only that a doctor have privileges at any hospital as a "distinction without a difference." The court also ruled that requiring pharmaceutical abortion be administered according to a 14-year-old protocol – that requires additional in-person doctor visits and reduces the available medication period – is also no undue burden.

Since HB 2 took effect, 12 clinics have closed – including the only two in the Valley, as predicted at trial. While the Corpus Christi clinic is roughly 150 miles from the heart of the Valley, the ability of women to travel there is subject to limited finances and transportation. The state's remaining clinics (along the I-35 corridor, in Houston, and one in El Paso) mean that many women outside these population centers would have to travel very far to get services. In short, it's hard to comprehend how the notion that it isn't a burden for a woman to have to travel hundreds of miles for a legal abortion doesn't naturally conflict with the assertion that a 30-mile admitting-privileges rule would actually protect women's health.

Of course, not everyone is dissatisfied with the court's confounding logic. Texas Gov. Rick Perry and gubernatorial hopeful, Attorney General Greg Abbott, each praised the ruling. In a press release, Abbott called it a "vindication of the careful deliberation by the Texas Legislature to craft a law to protect the health and safety of Texas women." Perry applauded it as a win for Texas women "and the unborn."

Advocates have vowed to appeal the case to the U.S. Supreme Court.