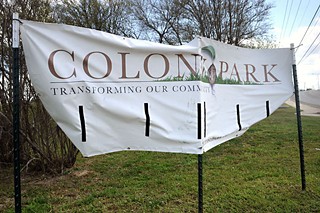 A banner announces the ongoing transformation of Colony Park, a Northeast Austin neighborhood slated for a city-initiated makeover. (Photo by John Anderson)

• The next City Council meeting isn't until April 10 (work session April 8) with a fairly light draft agenda, but dust might rise over a proposed new policy on interim budget adjustments and a 4pm hearing on vested development rights (i.e., grandfathering).

› After cracking down on house-sharing with their "stealth dorm" rules, last week Council moved forward with plans to make it easier to build sub-500-square-foot "micro apartments" – many of which could come with shared communal spaces.

› Travis County prosecutors have filed 20 new charges against Rashad Owens, jailed for the deadly SXSW Red River rampage. All 20 charges are for aggravated assault with a deadly weapon, for each of the 20 people injured in the incident. Owens is slated to appear in court April 9.

› Bye-bye, Meria. AISD Superintendent Meria Carstarphen blindsided trustees with her March 27 announcement that she is the sole finalist to run Atlanta Public Schools, and could leave Austin before the end of April.

› Education Austin and literacy charity First Book teamed up March 29 to hand out over 40,000 books across AISD. Each of the 773 teachers, administrators, and district employees who turned up at the old Allan cam­pus got 50 books each to give to kids in their schools.

› Free tickets to next week's "Civil Rights Summit," April 8-10 at the LBJ Library, disappeared within 20 minutes when they became available Monday, with people eager to hear Pres. Barack Oba­ma and several former presidents speak on LBJ's legacy in honor of the 50th anniversary of the 1964 Civil Rights Act. See www.civilrightssummit.org.

› On Tuesday, White Lodging announced another hotel project for Congress Avenue, this one a 32-story, two-hotel (combined), 410-room complex at Seventh and Congress, just across from the Stephen F. Austin, planned to open in 2016. Economic incentives? Haven't been mentioned ... yet.

› The House Public Education Committee met last week to discuss concerns about the school changes passed last session in House Bill 5. With multiple graduation paths but only one counselor for every 400 students, Rep. Harold Dutton, D-Houston, warned that lawmakers have created "a maze" for Texas students.

› In a negotiated compromise, Congress this week passed a bill that includes a one-year extension of the first-ever dedicated funding stream for comprehensive sexual health education. The funding comes at a price, of course: The bill also includes another year of funding for the feds' abstinence-only-until-marriage program.