Changes in Store for Duncan/BMX Park 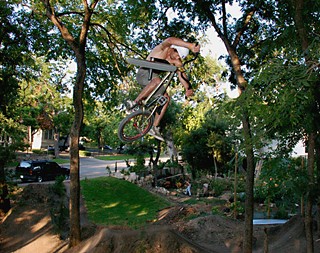 The BMX trails at Duncan Park (Courtesy of ninthstreetbmx.com)

Last Thursday, two BMX riders – Mike Esparza and Todd Wood, who were instrumental in the 22-year development of the jumps and trails along West Ninth Street just off Lamar – met with the Parks and Rec­reation Department's project management supervisor Marty Stump to talk about some changes that may be coming to Duncan Park – which encompasses both the greenspace north of Ninth Street, and the smaller, homemade BMX park to the south.

Stump called the meeting an introductory one – the BMX side of which, with very little city involvement, conceived and built the trails where there was once a homeless campground, constructing one of the most prestigious natural trails in the country. The meeting occurred as PARD began a six-to-ten-month planning process designed to solve a few problems stemming from the park's location in the Shoal Creek floodplain, as well as some concerns about the park's changing demographic and use patterns. A few details emerged about what issues PARD is looking to fix moving forward; chief among them, Stump said, is figuring out how to extract roughly 400 cubic yards of soil from the park – both the BMX trails and the four-acre space north of Ninth Street – so as to ensure that any Shoal Creek flooding can flow downstream without obstruction.

Stump also said that the city is considering options to plant trees somewhere on the park site that would effectively replace any that the bikers might have damaged while piling dirt around trunks for jumps, as well as making a few changes to the sidewalk along the trails that could change the trails' exposed entryway. "We have to be mindful of the interface between the bicyclists and the pedestrians," he said, "particularly if you have kids using that public sidewalk. One thing we'll be looking at in addition to the park design is what the street profile looks like. Do we need to realign the sidewalk? Does there need to be a separation, like a seat wall, that creates a buffer between the cycle use and the public sidewalk?"

There should be a clearer picture by the fall, and the riders at the trails on Fri­day afternoon didn't seem too concerned with the way a few missing feet of surface would encroach upon their runs. They did dispute the notion that much of those 400 cubic yards of soil came from their own unauthorized dumping – although they did admit to trucking in at least a few piles of dirt during their 22 years in the park. (Some quick math: 400 cubic yards of dirt would fill 3,600 full-sized wheelbarrows. Since Feb. 1992, there have been roughly 8,000 days.)

Stump stressed that the excess of soil around Ninth Street doesn't necessary mean that the city will have to pull dirt from the trails. "On the north side of Ninth Street in the park there's a flat area. If we can design the park and figure out how to remove that amount of soil from that side of the park," he said, "we won't be required to remove any portion of the BMX course."

Meeting attendee Esparza stayed mum on the discussions, while Greg Tait – who did not attend the PARD meeting, but is a trail veteran, works professionally as a land surveyor, and helped design the Red Box trails in South Austin – took the lead. Tait said he's eager to see what actually materializes from these meetings, citing a number of discussions he's had with the city about the Ninth Street trails during the past ten years. He stressed that PARD Director Sara Hensley "has always been cool as shit" about the park.

Concluded Stump, "We're not motivated by a desire as the city to remove that facility, but at the same time, we do have a responsibility to make sure that the use is as environmentally compliant and that we don't have conflicts."