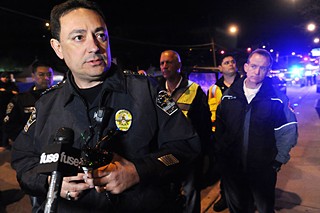 › One out and one in: Place 4 Council Member Laura Morrison announced Tuesday she will not be running for mayor in November, and Place 2 Council Member Mike Martinez announced Wednesday that he will. Both are term-limited in their current positions: Morrison said she's "not sure" what she'll do next, and Martinez currently faces the only other declared candidate, eminent domain attorney Stephen Adler.

› Austin continued to pick up the physical and emotional pieces after the March 14 crash on Red River that has killed three people, left a fourth in critical condition, and injured many others; the driver, Rashad Owens, has been charged with capital murder.

› Austin Police arrested rapper Tyler, the Creator Saturday on a charge of "riot" – a Class A misdemeanor. According to the APD affidavit, Scoot Inn employees were attempting to enforce a one-out/one-in rule when Okonma allegedly began shouting, "All y'all outside the [wooden] gates, all y'all push through!" The crowd responded by crushing through – nearly trampling people who fell near the front of the onrushing crowd.

› A domestic disturbance call Tuesday afternoon ended with an APD veteran shooting a man, Jawhari Smith, who police say refused to drop a pistol hidden behind his back. The sergeant who shot Smith ordered him several times to drop the weapon, firing only after Smith refused. The sergeant is on administrative leave pending an investigation into the incident. Smith is in the hospital and expected to recover.

› There was hilarity among Capitol journalists as Michael Quinn Sullivan, president of right-wing think-tank Empower Texans, badgered Rep. Dan Branch, R-Dallas, with an emailed question, claiming he was a journalist on a tight deadline. Sullivan, who currently faces an ethics complaint of being an unregistered lobbyist, was hired recently by Breitbart Texas as a columnist.

› AISD canceled the traditional, nonviolent tag game of "assassins" organized annually by students at the Liberal Arts and Science Academy, after a random viewer contacted KXAN news. While saying no student was in danger, AISD banned all such games "due to education and security concerns."